This page is to act as a reference for those developing Starbounder Templates, CSS, and wiki-specific images. This information is a compilation of contributor/editor/admin discussions via IRC, PMs, and empirical conclusions. Deviations from this are at contributors' discretion, but this is a wiki - so if it doesn't work, someone will change it to something that does. That said, the colors below should be considered a safe framework.

The primary thing to keep in mind is to match the game's UI as closely as reasonably possible, and to sensibly use game assets.

The following colors are taken from tiered icon borders. These use a linear gradient between the two colors whose hex values are given. These key values are also used elsewhere in the UI.

Something to keep in mind about these colors: in the HSB spectrum, the lighter key colors are all hsb(#,69,77), and the darker key colors are hsb(#,67,47). Use this if the above hues don't work for your use. 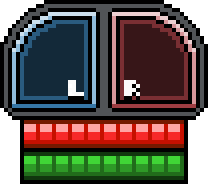 For times when two things are compared with the aid of color, consider the following:

The orange text used on crafting items is #FFA500.

The colors chosen for the three distinct tiers in the racial table were found by averaging the sprites' hex values (within a standard empirical deviation).

The old material rubium was once used in the racial table, and is listed here for legacy reference.

Several, several, several, (like... 50) shades of gray are used in the game's UI. Some of them are listed below, in no particular order. When mimicking the game's UI, it's best to pull your color values directly from the game asset you're attempting to copy. For simplicity's sake, see if it's possible to copy a currently existing color set from Starbounder.

Starbound uses more transparency than you may initially think, but the proper alpha value is harder to obtain, even when working with the raw asset (for example, Photoshop has relatively little alpha usability). The two transparent shades of gray used on this wiki are:

Which is the lighter grey, used in the header and footer, and:

Which is the black used for the body of the site.

These two colors are accurate to the two most common transparencies used in the game's UI. The lighter one in particular can produce dynamic results when layered on top of itself, or by varying the alpha (0.7, for example).