A crew member role. Can outfit other crew members with custom uniforms.

Tailors are a crew member role for player ships. Their uniform color is purple.

Tailors can be recruited the same way all other crew roles (except Outlaw) can by completing procedurally-generated NPC quests, which will give the quest giver a chance to turn into a recruit-able crew member with a 1/7 base chance to choose the Tailor class. However, there are a few ways to increase the chance for an NPC to become a tailor:

If a friendly NPC or a Tenant is a Philanthropist or Socialite, they will have a 100% chance to become a Tailor compared to other NPCs (14.3%).

Tailors are the only crew member that cannot tag along with their captain, and are forced to stay on their ship as a result. Instead, when interacted with a tailor, the player is prompted to to change their crew members' uniforms from the default Protectorate uniform to a custom outfit based on the cosmetic armor you are wearing when you speak with them. Your crew members will wear colorized versions of the assigned uniform to indicate what their roles aboard the ship are. However, this will only change attire from the torso down, meaning crew members will not wear the helmet you have equipped, and any crew members that were wearing a special helmet prior to recruitment will continue to wear it. Even if the captain chooses to change into a different uniform after speaking with a tailor, crew members will continue to wear the same uniform. The only way to change crew attire is to speaking to a tailor again, which gives you the option to return to the default Protectorate uniforms. Talking to a tailor a third time will allow you to update your crew's uniforms again to match your attire.

Tailors are capable of using either Shortswords or Pistols. However, because they are unable to leave their captain's ship, they rarely use these weapons and enter combat. 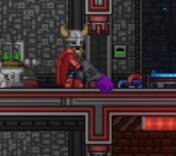 A Glitch Soldier wearing a custom outfit. The custom helmet he is wearing was created from a procedurally-generated guard quest before being recruited.