Missions are the simplest type of Tiled-based content to integrate into Starbound, so for brevity our first example Tiled project will be creating a mission.

Download this archive and extract it into your Starbound/giraffe_storage/mods/ directory. You should end up with this:

And inside that directory:

You can warp to the mission by first enabling admin in the chatbox:

And then entering this command:

With admin on, you'll be able to teleport back to your ship at any time. 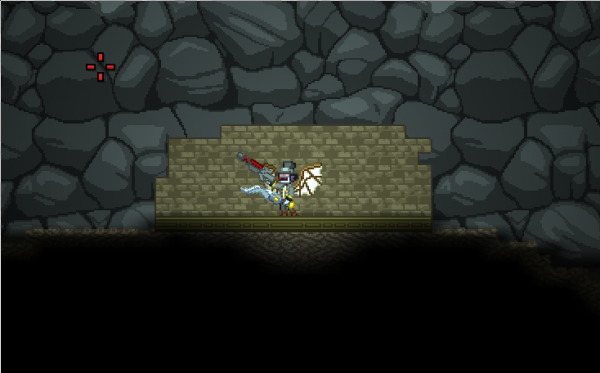 Let's run through the components of this mod:

Go ahead and open up examplemission.json in Tiled. If you've not done it already, instructions for setting up Tiled for use with Starbound are here.

Right now, this map is pretty boring, consisting of a giant lump of the 'brain' material and a partially constructed background wall. But we're going to make it more interesting.

First, let’s finish that background wall. Select the ‘back’ layer in the layers panel. There are two types of layers: tile layers and object layers. Tile layers are for materials, liquids and the tiles in the ‘miscellaneous’ tileset. Everything else goes into object layers.

), and then you can either:

Now finish off that background wall. Clicking and dragging in the map view will paint the selected tile onto the current layer. You can use the eyedropper trick on the foreground tiles as well if you switch to the front layer. Just make sure you switch back into the right layer afterwards, before painting again.

Experiment with the other tools as well.

If you’ve done much in Photoshop or GIMP before, you can probably tell what most of these are going to do. These tools, and the Brush Stamp Tool (B) can only be used on tile layers. 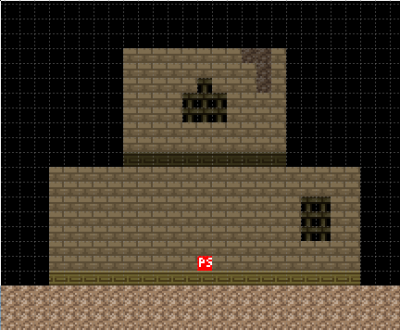 By now, you’re probably wondering what the red tile on the floor in the front layer is for. That’s the special Player Start marker tile from the miscellaneous tileset indicating that the player should start at that position in the mission. It’s invisible in-game.

There are many other useful tiles in the miscellaneous tileset, including invisible walls, placement anchors, connectors for dungeons, and biome-related brushes, but you won’t need them for most missions.

Switch to the front layer and let’s add some foreground walls to the building. 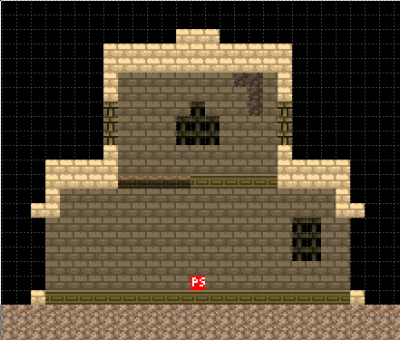 Most of the tiles I added here in the materials tileset. The wooden platform on the left of the first floor (second floor if you’re American) is platform from the supports tileset.

It’s advisable to check your mission still works by loading it in game occasionally while you’re working on it. You’ll immediately find out if you’ve accidentally erased the Player Start marker, or put an object or tile on the wrong layer, so save and go do that now.

You’ll notice we’re missing something important: lights. We could also do with some doors for the building, decorations and an exit teleporter. All these things are objects.

Let’s switch to the ‘objects’ layer in the Layers panel. Select the Insert Tile tool (

). The lights tileset is already loaded in this map, so select a light object you like the look of and click on the map view, placing the object. Don’t worry if it’s in the wrong place. You can use the Select Objects (S) tool to select the object and move it somewhere else.

With most objects you can press the X key while they’re selected in the editor to flip them horizontally. Tiled lets you do a lot of other things with objects as well, such as vertical flipping, rotation and scaling, but Starbound does not support this.

In order to place doors, decorations and the exit teleporter, you’ll need to load more tilesets. To do that, go to Map > Add External Tileset, navigate to the tilesets/packed/ directory in the unpacked assets, and select one of the .json files. If you don’t see any .json files in there, make sure “Json tileset files” is the selected format in the open file dialog. 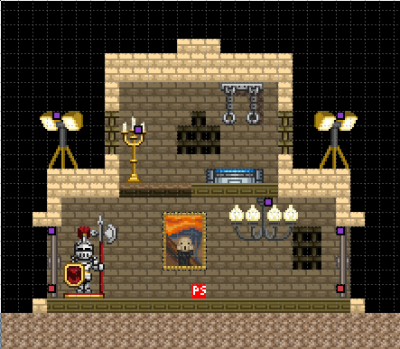 The objects I've used here are:

Starbound has some rules for object placement that Tiled doesn’t know about. One example is that objects aren’t allowed to overlap. There’s no way to tell if you’ve made a mistake within Tiled, so save your map again, start up Starbound, warp to your mission and make sure your objects placed OK. 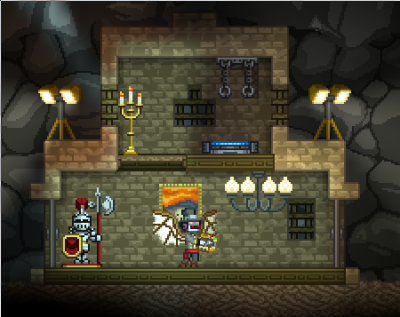 You can also wire up puzzles and traps in Tiled! Wiring is performed in object layers as well, but it’s usually best to put it in its own object layer so that you can hide wiring independently of other objects. Create a new object layer in the Layers panel (

To hide the wiring all you’ll need to do is uncheck the checkbox to the left of the layer’s name.

Wiring nodes are displayed over objects in the editor as red and purple squares. Red nodes are output nodes, and purple nodes are input nodes. To connect two nodes, choose the Insert Polyline (L) tool (

Note that if you’ve flipped one of the objects you want to connect with the X key, the wiring nodes will appear in the wrong place in the editor. Pay attention to where the nodes are before flipping the object. 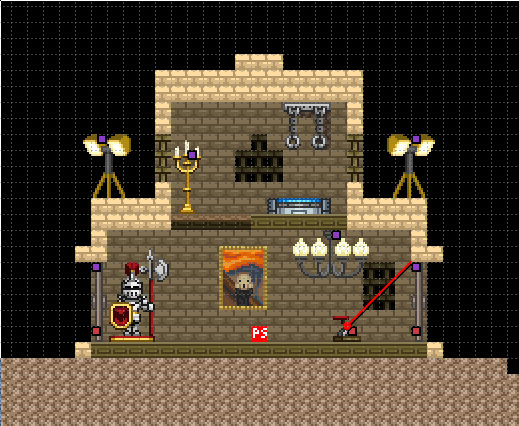 Here, I’ve wired the door to a medievalswitchlever from the tileset objects-by-category/wire. As well as switches, that tileset also contains logic gates, moving platforms and turrets.

Liquids are painted into the map just like materials. You can find them in the liquids tileset.

Let’s surround our brain material island with pools of lava. Select the ‘lava_source’ tile from the liquids tileset. There’s also a plain lava tile in the liquids tileset, but since we have no background wall behind where the lava is going it would drain away. The lava_source tile is endless and won’t drain through the background.

Select the ‘front’ layer and then paint the endless lava around the brain. 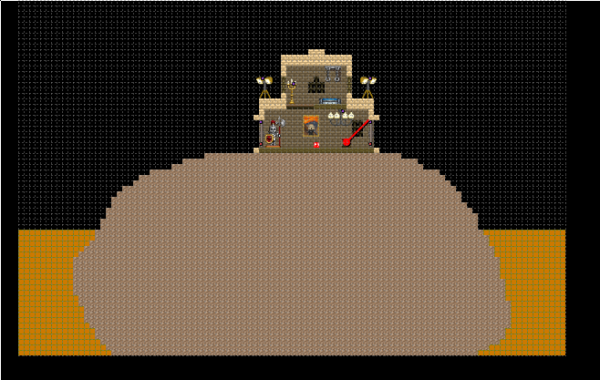 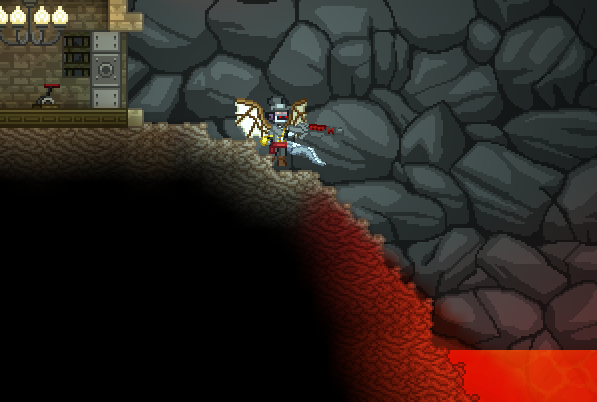 What a lovely glow.

There don’t currently exist any tilesets for placing monsters in the world, so for this, we drop down to configuring them in the Properties panel.

Start by creating a new object layer for our monsters, and then switch to it.

). Starbound treats the rectangles this creates specially. On their own, rectangles do not change the map in-game at all. But by setting properties on them with the Properties panel, you can perform operations on each tile the rectangle covers. These operations can do anything you’ve seen in any dungeon, microdungeon or mission in Starbound.

There are a lot of things you can do with them that can’t be covered here. A good way to find out what you can use them for is to open up the Tiled maps in the unpacked assets and inspect the any rectangles in them with the Properties panel.

Drag out a 2x1 rectangle somewhere on your map, and then in the Properties panel, click Add Property (

). When it asks for the property name, enter “monster”, in lower case, without the quotes. Put “moontant” as the value (again, without quotes), then save and load the mission up in Starbound.

“Moontant” is a type of monster defined in a .monstertype file in the assets. So what this will do is spawn one moontant monster at each tile the rectangle covers. If the rectangle is 2x1, it will spawn two monsters.

Be aware that it will spawn them with their heads at the position of the tiles under the rectangle, so if you put it on the ground, they’ll be partially buried. Lift the rectangle a few tiles up with the Select Objects (

) tool if you put it in the wrong place. 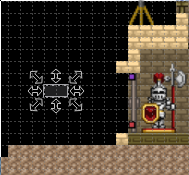 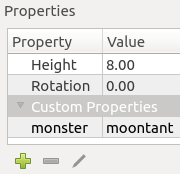 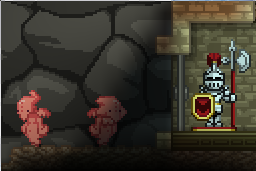 The other properties you can set on monsters are:

NPCs are spawned in a similar way to monsters, but instead of defining the “monster” property, you set both “npc” and “typeName” (case sensitive).

NPCs support the “seed” and “parameters” properties as well as monsters. 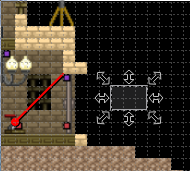 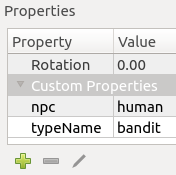 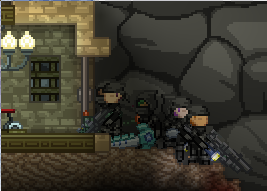 You can download my version of the “finished” mission, with all the objects, liquids, npcs and monsters I used here.