The Glitch starter ship resembles a castle with turrets and a (non-functional) cannon.

The pet unique to Glitch ships is a piglett.

As the player progresses farther into the story of Starbound, they'll unlock additional modules on their starter ship. These additional modules provide more space on the ship for players to place objects, as well as crafting stations, containers, and furniture.

Initially the players ship is broken, and the first stage of the story is to repair it. After that the ship engines need to be repaired. By the third stage of upgrade the ship is fully repaired and additional stages increase size.

After repairing the ship FTL drive the player will open a variety of missions that will allow them to upgrade the side of their ship. These quests are given at the outpost and are as follows; 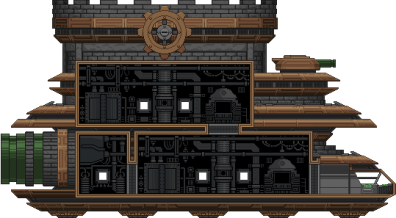