See Also: Category:Glitch
The Glitch are one of the seven playable races in Starbound, and one of the six races entrusted with an Ancient artifact.

Despite being incredibly advanced robots, Glitch society is quite literally medieval. Built by an unknown race eons ago to simulate organic life and society, something went wrong and the Glitch got caught in an unending loop where they would not advance past the "stone castles and agrarian villages" stage.[1] Just how long the Glitch have been locked in this state is unknown; empires have risen and fallen, and the citizenry just keeps trundling on at their assigned tasks year after year, content in their work, and letting the universe pass them by.

The Glitch themselves look like something constructed in the dark ages, their simplistic exteriors belying the stunningly enhanced programming that keeps them running. Glitch knights are not constructed any hardier than a mere automato farmer, so warriors don bulky steel armor and carry old-fashioned melee weapons, and sometimes simple bows. They have to eat to draw power, using the released methane from digestion as fuel rather than the actual foodstuffs themselves.[2] Even their "medicine" is meant to simulate organic cures and healing, despite them not physically needing the processes to work this way.[3] As their "faces" are not built to convey expression, Glitch preface their speech with a single-word statement of emotion or intent to make sure their meaning is clear. "Cordial. Happy to meet you!" "Enraged. I'll chop your head off!"

Glitch do die and do procreate, though the latter is decidedly not the same process as it is with biological life-forms. The "parents" choose parts for their "offspring", then enter a trance-like state where the two assemble the new Glitch silently and with a speed and skill not shown in everyday Glitch activities. This process takes several building sessions over the course of weeks, and is performed in private.[4]

Not all Glitch stay within their programming, however. It is not common, but sometimes a Glitch will break free of their coding "blind spots", and become truly self-aware. These individuals are pitied yet shunned, as this self-determination is considered a flaw, detrimental to the smooth operation of the Glitch way of life. These "Outcasts" still retain many of the same psychological quirks of their race despite this awareness, but their sudden yearning to be more than what they were leads them to travel the stars and find their own purpose.

Though most Glitch stay in their villages and castles, a few Glitch splinter groups have formed and spread across the cosmos. The Rainbow Rogues don brilliantly-colored and sparkly capes and cowls, bringing blinding justice wherever they travel. Less virtuous are the battle-hungry All-Seeing Knights, who at least have a code of honor and will fight for those who offer them shelter... unlike the similarly-themed All-Seeing Crusaders, who patrol ruins in Eyepatches across the galaxy and attack anyone within sight.

Glitch as the player character

As with the other player races, Glitch characters are given a set of uniquely-styled Armors, their own Ship type (with included Pet), and two unique Mech bodies. The Glitch equipment starts at knights in armor and gets more fantasy-nights-in-armor as its strength increases, though their stats are the same for all other race's equipment at the same Tier.

A Glitch player has four sets of race-specific Starter Clothing to choose from in the Character Creator, plus the standard-issue Protectorate T-Shirt and Protectorate Vest. These items have no defensive capabilities whatsoever. These four sets are also used to clothe randomly-generated Glitch NPC villagers.

There are a number of Glitch-related Cosmetic Armors to be found scattered across the universe, usually in Glitch-themed Dungeons, but sometimes in random/Biome chests. Like the Starter Clothing, these have no defensive capabilities, but let the player customize their character's appearance.

The Glitch Ship maintains the illusion of medieval living with stone battlements up top. Its size can be expanded by obtaining more Crew members, which allows the player to buy a higher-class Ship Licence from Penguin Pete for every two more Crew members. Alternately, the player can buy counterfeit licenses from Penguin Bay: these licenses are expensive, but do not have crew requirements attached to them.

Once upgraded to the Condor Class (the largest Ship class), the Glitch Ship is basically a flying castle, complete with towers.

Glitch ship pets are Pigs, coming in one of ten different colors/patterns chosen at random.

Glitch NPCs are fairly common. Lone Glitch Merchants can pop up on nearly any world (both through normal planetary generation and temporarily as part of a Quest), and spaceships and space stations may have Glitch crew. 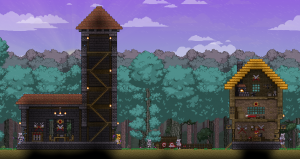 Glitch villages and dungeons can be found on all planet types that can have surface-level full-sized dungeons except for Lush (aka "starter") planets. They are most likely to appear on Volcanic planets over any other type.

The Old Sewer dungeon might be considered a Glitch-themed dungeon, despite the lack of any Glitch NPCs or Glitch decor in it (and its apparent higher technology level). Decor items from the sewer have the Tag "Glitchsewer", and early Lore made a connection between the robot-people and the Sewers, but Tags are hidden in-game and that Lore has since been excised from canon.

The Quest to find the Glitch Artifact is the final one of the five Artifact Quests the player must undertake. This two-part hunt first involves finding Glitch decor items and scanning them, giving Esther data to locate the Artifact's whereabouts. Once she has enough data, the player can travel directly to the Baron's Keep to retrieve it. Be ready for a fight.

Once the Glitch Artifact has been retrieved, the Baron will set up camp at the Outpost near the Ark. From there, he can take the player's Broken Broadsword and turn it into the powerful Protector's Broadsword. Though he (and the other story-quest characters) will still be at the Outpost if the player brings a new character there, the Quest to repair the sword will not be available until that character completes the Glitch Artifact quest.

Glitch feature in a good number of Codex books, both written by Avian and by other races.

The player can find fossilized remains of Glitch underground on most planets by successfully completing a fossil mini-game. The prizes for completion are randomized, so it may take a lot of tries to obtain even a single piece.

Once a complete set of skull, torso and legs has been collected, they can be placed in a Medium Fossil Display, forming a complete Glitch "skeleton" to be put on display as a decor item. This also completes entry #14 in the Fossil Collections Library. Once the skeleton and display have been combined, they cannot be disassembled.