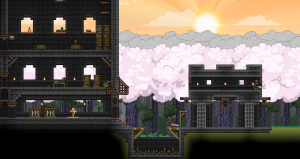 A Glitch Evil Fortress guardhouse.
Glitch Evil Fortress is a Glitch themed dungeon made up of a large castle, adorned with copper piping, dark banners and hostile Glitch knights. The black banners differentiate these from friendly Glitch Castles, but they have a number of the same objects inside.

Players are often required to climb high into the towers of these large castles to find treasure and scanning clues. There are a number of suspended platforms and bridges which connect the upper sections.

These castles can be found on any planet type aside from moons, any ocean worlds (including magma, arctic, and toxic), or garden planets. They are most likely to appear on volcanic planets over any other planet type. It should be noted that these castles have lots of obstacles. There are lots of glitch dark knights, a glitch that looks as though he is meant to be a executioner, at least two Glitch Knights, parkour that has procedurally generated dragon monsters, and a king who not only is guarded by a glitch dark knight and a Glitch Knight below, but also has a capture pod.

The ID used by the /placedungeon command is 'evilfortress' (Warning: placing a dungeon may cause some objects to disappear and animals will also appear within the dungeon)

If enough tagged dungeon objects are placed together with a Colony Deed a unique villager tenant can be summoned. There are a number of objects in this dungeon also found in Glitch Castles; they share a tenant tag.

See the glitchcastle tag detail page for a complete listing of tagged objects.