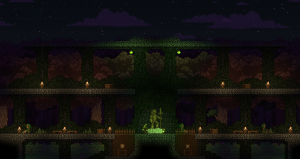 An entrance to a Hunting Grounds dungeon.
Floran Hunting Grounds are a Floran themed dungeon made up of an overgrown structure, mostly underground and patrolled by hostile Floran guards. It has significantly more light than a canyon dungeon, and has more structure and windows inside. It was one of the earliest dungeons, playable through most of beta.

The entrance is often a large guarded building with a Large Floran Statue near the tunnel to the dungeon below.

The ID used by the /placedungeon command is 'floranhuntinggrounds' (Warning: placing a dungeon may cause some objects to disappear and animals will also appear within the dungeon)

If enough tagged dungeon objects are placed together with a Colony Deed a unique Floran guard can be summoned. These guards resemble the hunters inside the Ceremonial Hunting Caverns.

See the floranhuntinggrounds tag detail page for a complete listing of tagged objects.