See Also: Category:Floran
The Floran are one of the seven playable races in Starbound, and one of the six races entrusted with an Ancient artifact.

Plant-based humanoids, they are extremely violent carnivores with no central government or power structure, split into numerous tribes spread across the universe, each led by a Greenfinger. Though they are biologically a single-sex race[1], they may adapt sexually dimorphic physical traits and male/female identities if they so choose. Their speech is often simplistic, and they tend to hisss their sibilantsss. Their primary drives are hunting, acquiring trophies, fighting, eating meat, and more hunting. It is speculated that their general casual view towards killing and consuming other intelligent species stems from not viewing "meat" as "alive" in the same sense they are.[2] However, as the Floran spread throughout the galaxy, more and more individuals are recognizing a need to integrate, make friends, and maybe not stab anyone that slightly inconveniences them.

A relatively young race, they have primitive technology but are incredibly adept at scavenging and—thanks to the Greenfingers' unique gifts—reverse-engineering other races' tech, much to the universe's chagrin.

They have a an ugly history with the Hylotl, as the Floran drove the Hylotl under the oceans during a major period of expansion akin to an invasion. While open hostilities have ceased and things have been peaceful for generations, the Hylotl have not forgotten this event and some still harbor disdain towards the Floran. For the Floran's part however they have largely moved on.

Floran as the player character

The Floran ship pet, a Snake (1 of 10 colorations)

As with the other player races, Floran characters are given a set of uniquely-styled Armor, their own Ship type (with included Pet), and two unique Mech bodies. The Floran equipment generally has a more primitive, cobbled-together look than the other races' gear, though their stats are the same for all other race's equipment at the same Tier.

A Floran player has five sets of race-specific Starter Clothing to choose from in the Character Creator, plus the standard-issue Protectorate T-Shirt and Protectorate Vest. These items have no defensive capabilities whatsoever. These five sets are also used to clothe randomly-generated Floran NPC villagers.

Four of these sets can also be crafted at the Spinning Wheel and Sewing Machine; the "Survivalist" set is oddly missing.

There are a number of Floran-related Cosmetic Armors to be found scattered across the cosmos, usually in Floran-themed Dungeons, but sometimes in random/Biome chests. Like the Starter Clothing, these have no defensive capabilities, but let the player customize their character's appearance.

The Floran Ship is a flying mish-mash of parts from other races' ships plus bits from unknown sources, held together with vines and plant matter. Its size can be expanded by obtaining more Crew members, which allows the player to buy a higher-class Ship Licence from Penguin Pete for every two more Crew members. Alternately, the player can buy counterfeit licenses from Penguin Bay: these licenses are expensive, but do not have crew requirements attached to them.

Once upgraded to the Condor Class (the largest Ship class), the Floran ship has the most interior space of all the player ships by a small margin, though its rooms are rather irregularly-placed.

Floran ship pets are Snakes, coming in one of ten different colors chosen at random.

Floran NPCs are actually one of the less-frequently-encountered races outside of their villages and dungeons. While lone Floran Merchants can pop up on nearly any world (both through normal planetary generation and temporarily as part of a Quest), and spaceships and space stations may have Floran crew, they never appear as NPCs in mixed-race planetary Microdungeons such as Savannah settlements or Tundra science stations. 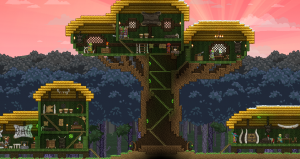 Floran villages and dungeons can be found on all planet types that can have surface-level full-sized dungeons except for Lush (aka "starter") planets. They are most likely to appear on Forest planets over any other type.

All Floran settlements are primitive structures full of plant-based blocks, and decorated with hunting trophies. Light is provided through fires or bio-luminescent objects. Dungeons also typically have several monsters within them, which can be beneficial to the player as they may attack the more dangerous Floran; one large hostile monster can sometimes take out multiple hostile Floran.

The Quest to find the Floran Artifact is the first of the five Artifact Quests the player must undertake, after Esther Bright has unlocked the "Scan" mode of the Matter Maniputlator. This two-part hunt first involves finding Floran decor items and scanning them, giving Esther data to locate the Artifact's whereabouts. Once she has enough data, the player can travel directly to the Ceremonial Hunting Caverns to retrieve it... with a little help.

Once the Player has retrieved the Artifact, Nuru will set up residence at the Outpost. They offer to send the player to the Arena for a series of progressively more challenging duels to the death, with a powerful weapon (and shiny trophies!) to be won.

Floran feature in a good number of Codex books, both written by Floran and by other races.

The player can find fossilized remains of Floran underground on most planets by successfully completing a fossil mini-game. The prizes for completion are randomized, so it may take a lot of tries to obtain even a single piece.

Once a complete set of skull, torso and legs has been collected, they can be placed in a Medium Fossil Display, forming a complete Floran skeleton to be put on display as a decor item. This also completes entry #13 in the Fossil Collections Library. Once the skeleton and display have been combined, they cannot be disassembled.