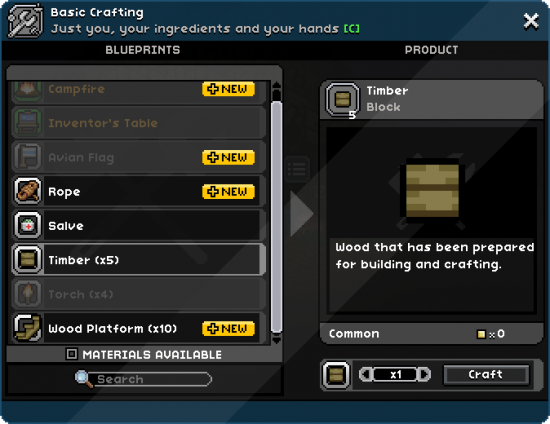 Crafting is the process of making items in Starbound by combining materials together. Crafting includes a large number of items, blocks, weapons, armor, and consumables.

The crafting interface consists of a list of items available to craft at the current crafting station. Players can hover over each item to view the material(s) needed to craft the item. The item is able to be crafted given that the player possesses enough of the required materials in their inventory. Players can choose the number of times the item is crafted by changing the numerical field at the bottom of the crafting window. Different items may have different crafting completion times, which can be seen as a progress bar over the icon next to the craft button.

There is a search bar above the category icons where the player can search craftable items by name or category. The player can also select the 'MATERIALS' checkbox, which will filter the list to include only schematics where all required components are in the player's inventory.

Block crafting includes any type of construction block, brick, or placeable material. Most blocks are crafted at a Wooden Workbench. Many blocks in the world will unlock a crafting recipe when they're picked up.

Armor crafting includes any armor or costume item that can be placed in an equipment slot. Crafting more powerful armor will require higher level materials.

Cooking is also a type of crafting, used to produce cooked food and drink. There are different cooking windows for different stations. For example, the cooking interface for a campfire is much simpler whereas the interface for a Kitchen Counter has multiple tabs.

Many schematics in the cooking interface are restricted to cooking crafting stations. Examples of cooking stations include the Campfire and Kitchen Counter. Stoves and ovens you find in villages are often also useable as a cooking station.

Tools crafting includes items that have a primarily non-combat use. This includes hoes, grappling hooks and ropes.

Furniture crafting involves any placeable objects in the furniture category such as beds, tables, and chairs. These objects may have unique uses, or be purely decorative.

Furniture is crafted using a Wooden Workbench, and most recipes are learned by finding blueprints.

Early Blueprint Icon tests
Blueprints are items that allow the player to learn a schematic. Each blueprint is associated with one crafting recipe, called a schematic.

Blueprints are found inside chests.

A schematic can only be learned once. Attempting to use a second blueprint for the same schematic will have no effect, and the player will recieve a message stating they already know how to craft the blueprint. Blueprints can be traded to other players or sold to merchants like items, allowing sharing of crafting recipes found in the world.

To spawn a blueprint refrence the itemname the blueprint describes, and add "-recipe" added onto the end, without spaces. for example: /spawnitem alienbed-recipe.

There's also a crafting map where you type in the item name that you want to craft and it will list all the raw items that is used for the recipe along with items used to craft the item. The person who created the program is meeperbeeper and the forum post can be found in the references section.[1] This tool is still in development and more features will be added in the future.

The link to the crafting map is located below: Starbound Crafting Map