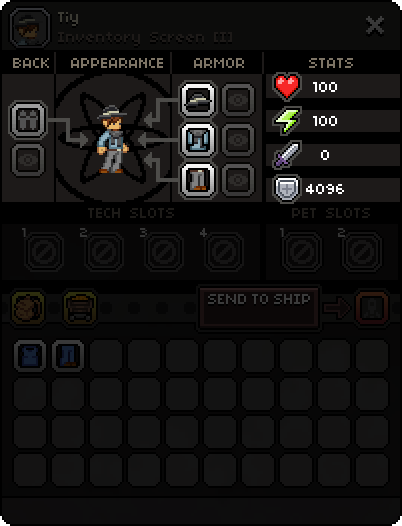 Armor is an item type in Starbound. Armor's main function is to provide protection and passive bonuses to multiple stats, such as health, defense, energy and attack power. Health is the primary stat for melee armor while Energy is favored for firearm use and raw Attack Power is the favored choice of staff and wand users. Assuming the armor is the same Tier, all armor has the same Defense stat, suggesting Defense is used purely to offset the increased creature damage found on more dangerous planets. There are four slots for armor available: Head, chest, legs and back.

Armor is equipped by dragging it from storage in the Inventory screen to the appropriate armor slot. A separate cosmetic option is available for each slot that lets the player receive the stat bonuses from one armor and visually wear another. Armor equipped in cosmetic slots will be visible, but the player will not gain its stats or special effects.

Available sources of armor are crafting, trading and looting. Armor is not procedurally generated.

Clothing is a type of cosmetic armor. All new characters start with clothing. Clothing can also be crafted at a Spinning Wheel using woven fabric, cotton wool, and leather.

There are a number of armor pieces which provide little to no stat bonuses and are designed mainly for cosmetic use.

This is the way defense works: for each 10 defense damage taken gets reduced by 10 percent. This means that the best armor in the game reduces damage by 80 percent.

Each race has a three-piece set, made out of headgear, chestpiece, and pants, for each of the 6 tiers, or 10 armor sets. Based on the character's race, they will initially unlock race-specific armor patterns.

Early tiered armor is made using an anvil, followed by a forge and replicator. Each tier provides incrementally better stats.

The Accelerator's Table is used to craft ranged combat armor with increased energy generation. It's specialized for use in combination with firearm weapons. Whilst it can also help staff and wand users, these weapons quickly restore energy after the initial tech casting so the benefit is reduced. Additionally, the energy bonus is enough to allow some melee weapons to use their special secondary attack more than once before triggering an energy wipeout and cooldown. Certain techs that use Energy, such as Sprint, can be used for longer with this armor type. The materials required for these sets is Refined Aegisalt and Solarium Star.

The Manipulator's Table is used to craft offensive combat armor with a high attack power bonus. Naturally, all weapon types benefit from a raw damage boost, however staves and wands benefit the most and this armor is designed with them in mind. Firearms are more powerful but short-lived with this armor type and melee users will be more vulnerable than they are used to and forced to play offensively. If you prefer to use a wide variety of weapon types this armor type is the best choice. The materials required for these sets is Refined Ferozium and Solarium Star.

The Separator's Table is used to craft survival focused armor with an improved health bonus. This offsets the higher damage received when using melee weapons. Firearms, staves and wands remain effective with this armor but receive no specific advantages, allowing melee weapons to edge ahead in performance. The materials required for these sets is Refined Violium and Solarium Star.

A variety of protective armor can also be found or purchased, most is sold by merchants. This armor mirrors stats of tiered racial armor, but has alternative appearances.

Due to wiki template bugs, the above table does not show all non-racial protective armor sets. Also available is the Explorer's Set, a tier 4 two-piece set. 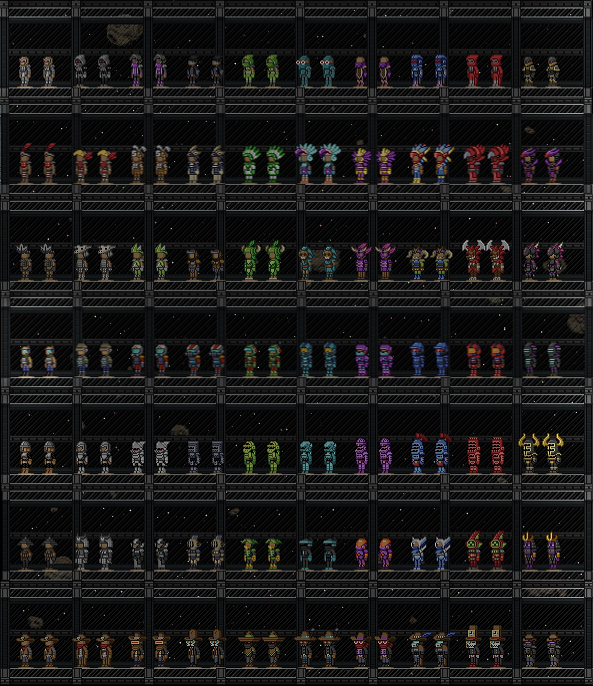