See Also: Category:Human
The Humans are one of the seven playable races in Starbound, and one of the six races entrusted with an Ancient artifact.

Humans hail from the planet Earth, and greatly resemble the Apex, only with much smaller brow-ridges and much less body hair; it is said that the Apex were likely much more Human-like before the VEP "inoculation" altered their physiology. Humans are generally an inventive, optimistic species with a drive to explore and learn, and are considered mostly harmless.

Not much is known about Human history before their discovery of warp drive, though what is known is that it involved a series of wars and conflict over finite resources. The ability to travel quickly between the stars soon led to a peaceful post-scarcity society, using advanced technology in the goal of exploration and the advancement of learning.[1] Despite their voyages across the stars, large-scale colonization was actually uncommon, as, with exception to colonies on Mars, many Humans either chose to return to Earth or live a more nomadic existence. Though settlements are rare, Humans are a common sight in scientific outposts and spacelanes throughout the universe, including many installations run by the Hylotl-owned Letheia Corporation.

During this time a few major groups came to prominence: the altruistic Terrene Protectorate, which sought to assist and welcome beings of any race for the betterment of all life in the universe, the Terrene Peacekeepers, who operated in allegiance to the Protectorate to safeguard it and Earth from criminal activity, and the profit-seeking and less-morally-upright Universal Space Corporate Military (aka the USCM), which aimed to promote Human colonization and "to spread the force and influence of humanity beyond Earth".[2] The USCM eventually collapsed after a long string of bad luck followed by a catastrophic bioweapon failure, with most of its remaining members taking up interstellar banditry.[3]

Humanity would suffer a crippling blow with the destruction of Earth, as it was torn apart by The Ruin. Billions of lives were lost, as well as most of the Protectorate's membership which had gathered at the main headquarters. This catastrophe also saw the rise of the Occasus Cult, a hidden organization of ultra-xenophobic Humans who sought to wipe all other races from existence through the Ruin's power.

Despite this, Humanity continues to survive, and perhaps one day may again thrive.

Humans as the player character

The Human ship pet, a Cat

As with the other player races, Human characters are given a set of uniquely-styled Armors, their own Ship type (with included Pet), and two unique Mech bodies. The Human equipment are generally high-tech semi-militaristic in aesthetic. Their stats are the same for all other race's equipment at the same Tier.

A Human player has four sets of race-specific Starter Clothing to choose from in the Character Creator, plus the standard-issue Protectorate T-Shirt and Protectorate Vest. These items have no defensive capabilities whatsoever. These four sets are also used to clothe randomly-generated Human NPC villagers.

All four sets can also be crafted at the Spinning Wheel and Sewing Machine.

The overwhelming majority of Cosmetic Armors in the game in random chests across the universe can be considered "Human"-themed. To save space, we are only going to list the items directly Human-tied, particularly those found in Human Dungeons. Like the Starter Clothing, these have no defensive capabilities, but let the player customize their character's appearance.

Once upgraded to the Condor Class (the largest Ship class), the Human ship takes on a decidedly "hammerheaded" look, with most of its bulk pushed to the back half, and a control room at the front of a long hall.

Human ship pets are Cats, coming in one of ten different colors and patterns chosen at random.

Human NPCs are incredibly common despite a relative lack of villages and dungeons. Lone Human Merchants can pop up on nearly any world (both through normal planetary generation and temporarily as part of a Quest), and spaceships and space stations may have Human crew. Humans are also common in multi-race microdungeons, such as Savannah houses and scientific outposts in Mutated and Tundra Biomes. On top of all that, the Occasus Cult and ex-USCM bandits are common foes on random planets and spaceships. 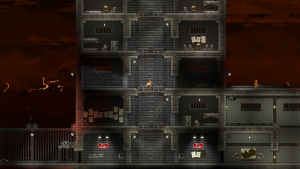 Human campsites and prisons can be found on all planet types that can have surface-level full-sized dungeons except for Lush (aka "starter") planets. Unlike other races' dungeons, there are no specific planet types they're more likely to occur on.

Humans feature in a good number of Codex books, both written by Humans and by other races.

Humans underwent a large number of changes during beta development, both in terms of backstory and in direct gameplay elements. For example, the USCM was a governmental service, not a corporate military, and served as the main human faction during the beta. Earlier drafts of their lore portrayed humanity as a series of rival nation-states fighting a war over ownership of Mars, and even earlier drafts had humanity united under a generic human empire.