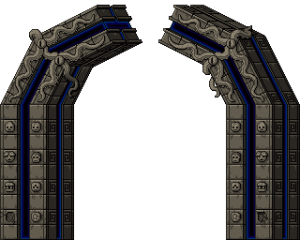 Players will first arrive at an unusable ancient gateway. Upon heading right, they will arrive at the main area of the outpost.

There are a number of different areas and stores in the outpost. Infinity Express is located in front of the outpost, and Penguin Bay is located out back. There is a cafe-type area with an Outpost Fridge and Chic Cooking Table as well as the EASEL machine for creating custom signs. The Outpost also contains a bathroom, a security room, and a loading bay.

Players can purchase a rotating assortment of themed furniture from Frögg Furnishing, agricultural items from Terramart, and vehicles from the Shipyard Captain on the outskirts past Penguin Bay. Even further past the Penguin Bay, there is a shop called Treasured Trophies which sells rare items.

Beneath the outpost mercenary penguins do shady business. You'll find the Beakeasy penguin bar underground. There players can get a side quest to defeat Dreadwing. Also, players can play Mazebound64 in the Beakeasy once the Great Sovereign Temple has been cleared. 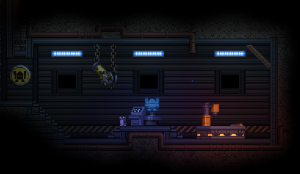 The Mech Workshop under the Outpost
In the same passage underground as the Beakeasy there's a workshop for outfitting mech vehicles and assembling parts. The penguin scientist here, Dr. Akaggy, gives a variety of mech quests after the player has repaired their ship, beginning with Test Drive to unlock the ability to pilot mechs.

This workshop is the main hub for crafting mech components and swapping out parts in the player's mech. Completing the quest Penguin Weaponry Testing Site (which unlocks after completing the Grand Pagoda Library mission) will unlock the Penguin Weapon Shop - also located below the Outpost. 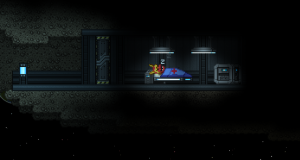 The hidden room under the Outpost
A small hidden room exists underneath the asteroid the outpost is built on. Inside it, the Insidious Mask can be found. The room can be accessed by rolling left off the outpost edge using the Spike Sphere or otherwise with Grappling Hooks.