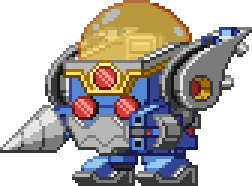 Vehicles are items which can be 'driven' and can allow the player to move quickly.

Vehicles are summoned using controllers which store the vehicle when not in use. Vehicles take damage and must be repaired by bringing your controller to Rob Repairo at the Outpost to be repaired with Auto Chips. If the vehicle takes too much damage it will be destroyed and cannot be resummoned until repaired.

Both vehicles and players are vulnerable to damage while in use, vehicles can also take damage from player weapons.

Hoverbikes can move quickly over ground (even if it's ground at the bottom of an ocean), and their hovering ability allows them to climb some walls. They have room to hold one driver and one passenger, but neither rider can use items while inside these vehicles.

Hoverbikes have different controls compared to those of the Player.

While in use, hoverbikes will do their best to hover 3 tiles above the ground (this tendency is why they can climb walls and even some shallow overhangs). They can move horizontally at up to 80 tiles per second (the player's default run speed is 14 tiles per second). These vehicles ignore platforms, a property also possessed by the Spike Sphere.

As a hoverbike takes damage, several effects will take place:

At high level Peacekeeper stations the Peacekeeper Store offers a custom hoverbike for sale which looks like a red sports car. It can be purchased using Peace Credits earned from bounty hunting missions

Boats can move quickly over any liquid (max boat speed is 35 tiles per second, almost double that of an Aqua Sphere in liquid), and they are immune to status effects inflicted by liquids (most notable of these is immunity to Lava's Melting effect). Though they have an innate 50% damage reduction like hoverbikes, they only have a max health of 100, so care should be taken when engaging in combat while standing on a boat.

A driver and a bow passenger can be accommodated by each boat, and the deck itself also serves as a platform on which entities can stand. The driver and bow passenger are unable to use items, but this restriction does not apply to players merely standing on the boat deck.

Boats can only be moved left and right within a liquid. If they come across platforms in a liquid, they will ignore them.

As a boat takes damage, several effects will take place: 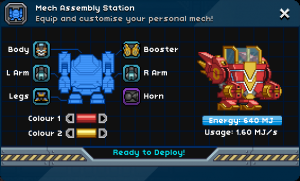 They were present as techs in the beta, and then were re-implemented as vehicles useable in both space and on ground, in update 1.3[1].

Dr. Akaggy can be found at the Mech Workshop under the Outpost. She will introduce the player to Mechs, and unlock their first, racial-themed vehicle after they complete the quest Test Drive. Also in the Mech Workshop are to important mech stations - the Mech Assembly Station and Mech Part Crafting Table.

The UFO is a Vehicle so far found on a Rank I Peacekeeper mission on top of the Bounty's base-and has no apparent relation with the outpost and cannot be taken off the planet it is found on. It hovers above the ground and can have it's height adjusted with W and S. Left-clicking will light up the bottom of the UFO and create a tractor beam that will freeze and hold creatures that enter it.

UFO on its stand, as found in some Peacekeeper Missions.

Animals hostile or not as well as humans, and Harmless small creatures such as rats can be captured in the UFO's tractor beam-even if the human has a ranged weapon they cannot attack the UFO or it's rider. Be careful when letting the creatures go if they are hostile as they can attack you immediately after being released. The UFO can be destroyed so be careful where you use it. The original pre 1.4 non-functional version can be found at the end hallway after defeating Dr. Akaggy's Shockhopper Mk I.

The Tank is a Vehicle found on a Rank I Peacekeeper mission inside the bounty's base-and has no apparent relation with the outpost and cannot be taken off the planet it is found on. It drives like a tank and can only drive up 1 block steep inclines-but it can jump 1 block high allowing it to get up 2 block steep inclines. The tank can be aimed with your mouse-but the direction of firing is very limited. Left clicking will fire a shell that causes a small explosion dealing a small amount of damage.

The Jeep is a Vehicle found on Rank IV Peacekeeper missions. It can not be brought with you, it can only be used in the mission itself. It act's like a hoverbike.

A Protectorate hovercraft, also known as the Dropship, can be found parked at the Erchius fuel station type base during a bounty. The hovercraft handles similarly to a hoverbike, albeit moving more slowly and maintaining an altitude of several blocks. It can be destroyed.

To purchase either Hoverbikes or Boats, travel to the Outpost and speak to Penguin Pete. Mechs can be unlocked from Dr. Akaggy, and more blueprints crafted at a Mech Part Crafting Table.

If you bring out your damaged vehicle before it's fully repaired, the vehicle will look progressively less worn depending on how many chips you've spent on it. The chips will be automatically processed once put in their slot, no confirm button necessary. 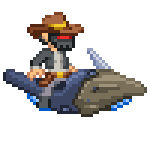 An early hoverbike mockup.
Hoverbike designs were teased in early alpha, though their design changed greatly by the time they were implemented in game.[2][3]