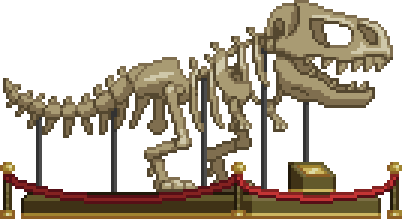 Fossils are found attached to the background in generic underground Layers (but not in underground Biomes) and salvaged using a fossil brush. When activated with a brush a mini-game allows players to uncover the fossil hidden under layers of stone and dirt. Specialized fossil tools and display stands are crafted using a fossil crafting station.

Fossils are the remains of long dead creatures scattered throughout Starbounds universe. They’re extremely valuable, very rare and very difficult to dig up. You’ll need special tools to clear the dirt and unearth a fossil. Removing the wrong piece of dirt could cause the fossil to crumble into dust. Successfully removed fossils can be placed as trophies, some have very special properties and perhaps some of these long dead creatures can even be revived.[1] 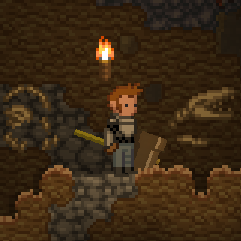 Fossils as they appear underground
The tools required to find fossils are specialized brushes. First it was Hammers but they were replaced by Brushes. These are used on exposed fossils to trigger the mini game. Higher quality brushes make better tools available within the mini-game. 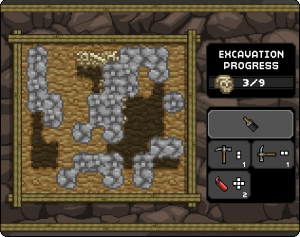 A fossil mini game triggered by an Advanced Fossil Brush
After using a fossil tool on an unearthed fossil a mini-game window will open. There are a variety of tools available for excavation, each is assigned a number of uses which is displayed on each tools button. The number of tool uses can vary depending on the mini-game generation and the type of brush used:

Using each tool will clear away sections of the excavation area. The brush can be used to remove dirt without being used up. The number of required tiles to clear away is displayed on the right hand side of the mini-game window. There are also treasure chests, which can be uncovered in addition to the fossil using the mini-game tools. If at any point the player cannot successfully clear, either because of destroying the fossil or not clearing enough rocks, the game will end and display a 'failed' or 'incomplete' message.

How to Win the Mini-game

Fossils are covered by both dirt and rock. The brush tool can be used to clear away dirt, but rock requires power tools with limited uses and specific shapes. If the power tools (non-brush) are used on any tile with a fossil without a rock layer in between, the fossil will be destroyed and the game automatically failed. Using a power tool on a dirt tile with a fossil beneath it will destroy the entire fossil. After clearing away the rock layer with a power tool or chisel, use the brush to uncover the fossil. Continue until the entire fossil is clear or all limited-use tools are used up.

(From left to right, the Chisel, the Left Drill, the Right Drill, the Dynamite, the Hammer, the Horizontal Mattock and the Vertical Mattock are shown in the table above.)

Successfully clearing the game will award a fossil, which can be placed on display inside display cases crafted at the fossil station. If a treasure chest was uncovered while playing the mini-game players will earn an additional reward. Chests which cover a 2x2 square give Treasure from the Fossil Bonus Treasure pool, but chests which cover a 3x3 square instead give treasure from the Fossil Rare Bonus Treasure pool.

Fossil pieces can be placed in display cases. There are three sizes of display case available, small, medium and large. The fossil size is identified in the tooltip for each fossil piece.

Interacting with placed display cases will open a container window. Placing fossil pieces inside will display them inside the corresponding case. Fossils can only be slotted into the case which matches their corresponding size.

Completed fossils can be picked up and replaced like normal decorative objects without requiring re-assembly.

For each complete fossil placed inside a display case players will fill an entry in their Collections Library. Each entry will show a picture and description after completion.

Small Fossils fit into small fossil display cases. Each display case requires one fossil piece to be completed. Once completed the fossil will be displayed inside and the display case will be gated with a velvet rope.

Medium Fossils are of ancient humanoids, they fit into medium fossil display cases. Each display case requires three fossil pieces to be completed. Once completed the fossil will be displayed inside and the display case will be gated with a velvet rope.

Large Fossils are of ancient monsters, they fit into large fossil display cases. Each display case requires five fossil pieces to be completed. Once completed the fossil will be displayed inside and the display case will be gated with a velvet rope. 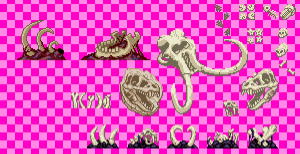 Early fossil sprites mockup
GeorgeV originally posted on the Official Forums with some of his ideas for how Fossils could be implemented in game. It appears he was responsible for the original propasals for fossils as a feature.

FOSSILS!
Fossils have been in many Starbound mocks we've shared. But sadly they've been pushed back to a non-priority. They would add so much character to worlds. They'd tie into a lot of systems. I drew the penguins and really love 'em. But gimmie fossils!

Basically, theoretically (seriously this system is 0% built, just some art is done for it) you would use a tool to carefully extract fossils from the ground. There would be a lot of fossil types. Some really rare, others really common. They'd do a variety of things like add to the atmosphere, be used in crafting on all sorts of things like perhaps armor. They might help you obtain dna for a T-Rex pet. They might help you summon a boss. They could do a variety of things.

All these are my ideas and I don't know if they'd stick (they're off the top of my head, these ideas are NOT confirmations of anything). We'd have to see what we could do. But I can't be the only one as a kid who dreamed about finding a T-Rex fossil in the ground![2]