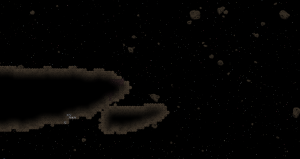 An asteroid field biome.
Asteroid Field is a primary biome type characterized by floating rocks in airless space. They are similar in appearance to the asteroids which are found above the atmosphere of most other planets. Because asteroid fields have no atmosphere there is no color in the sky, simply a view of nearby planets and stars day and night. Asteroid Fields are an 'low' threat level, in theory geared toward Tier 1 progression, although you cannot deploy to them without a mech, which start at Tier 3. Asteroid Fields have no gravity and so behave like a space encounter rather than a planet.

Asteroids are a quick and easy way to find incredible amounts of copper, silver and gold.

Asteroid Fields can be found orbiting all star types. Unless players have an EPP equipped or are piloting a mech they'll slowly run out of air while in asteroid fields, eventually taking damage when they start to suffocate. Any EPP can provide players with the air they need to survive outside their mech.

Skimbus is the only monster type found in asteroid fields.

Asteroid Fields no longer have any specific Navigation Console description text and are considered to be directly orbiting the star, so you can travel to any point in the Field manually.

Asteroid Fields are made up of a variety of floating islands of rock. They can be traveled between using techs or tools, but are not physically connected.

There is an extreme abundance of ore found in asteroid fields, with very large veins of copper, silver ore, and gold being available to mine inside some asteroids. This ore has a wide variety of uses but none of them involve progressing your character to a new tier. Because the rocks are relatively small, it's easy to see ore inside for mining. Some veins of Copper and Silver Ore will also contain more valuable ore (Silver or Gold) as a bonus. There are considerably more Copper veins than Silver, and considerably more Silver than Gold - though mining thousands of even Silver Ore will be easy to achieve.

There's no plant life or water of any kind found naturally in asteroid fields.

Asteroid fields use their own set of music tracks for both "day-time" and "night-time."

Asteroid Fields do not have any sub biomes as they are space encounters. Asteroid Fields can never form the surface of a planet, but a low-gravity variation of them will be present if you travel far enough above the Surface to enter the Space layer. This biome has a similar appearance, ore and monster profile.

There are no mini biomes which can be found in asteroid fields.

As a space encounter, Asteroid Fields do not have any weather to speak of whatsoever.

No crops can be found growing in asteroid fields.

The only monsters found in the Asteroid Fields are Skimbuses. No other types of monsters, critters or bugs can be found in them.

There are no drops unique to Asteroid Fields.

There are no villages or dungeons found in asteroid fields as their conditions are too harsh to support any type of settlement. However, a player-made colony can be successfully made here, but there is no guarantee that the player will be able to return to the same colony safely if the player's ship has been moved in the star system.

There are no villages which appear in Asteroid Fields.

There are no dungeons which appear in Asteroid Fields.