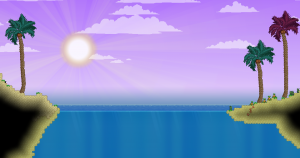 The surface of an ocean biome.
Ocean is a primary biome type characterized by a vast expanse of water with small scattered sandy islands. Traversing the surface is best done with boats or by swimming. The ocean floor is covered with plantlife, breakable shells, and possibly submerged ruins. Ocean planets are a 'risky' threat level, geared toward tier 3 in progression.

Ocean planets can be found orbiting temperate (orange), radioactive (yellow) and frozen (blue) star types. They also have a rare chance of being found around fiery (red) stars as satellites of gas giants. There are no environmental hazards in ocean biomes which require use of an environmental protection pack aside from deep oceans which can drown players not using a Breathing EPP.

The water found on ocean planets is infinite, and cannot be drained. All air below surface level is replaced with water. To build underwater and not have water spawn inside your structure, you must replace the background and foreground with blocks, then remove the foreground blocks and water will stop spawning.

The surface layer of oceans is primarily made up of water with small scattered islands made from sand and sandstone. Commonly these islands have palm trees which can be harvested for a few wooden logs and coconuts.

Ocean planets are mostly covered in water which spawns endlessly. There's no way to gather all of the water found in oceans.

Ores can be found on surface islands, with of copper, silver ore, gold, titanium and tungsten available in small quantities. Most ore is accessible beneath the ocean floor.

Ocean planets do not have any sub biomes which appear, and oceans do not appear as a sub biome on any other planet types.

There are no mini-biomes found on the surface or underwater in Ocean biomes.

Ocean planets do have two "biome levels" though, the ocean surface and the ocean floor. Each have their own distribution of drops, materials and crops.

Ocean planets deviate somewhat from planetary standards due to being ocean-type planets.

Weather in ocean biomes is mostly clear, with occasional rain or storms. Weather happens for each planet based on the weights given to the weather types (probability is calculated by dividing a single weight by the sum of all weights); the probability for weather types on Ocean planets is as follows:

Ocean biomes also have some tree resources available like coconuts and kelp which can both be reharvested from replanting palm trees and kelp saplings.

In addition to procedurally generated creatures, there are a variety of unique monsters, bugs and critters found in ocean biomes. Some of these are also found in other biomes, while others are unique only to ocean biomes. While these unique creatures have a chance to appear on ocean planets, they will not all appear on each one. In addition to unique creatures, each biome has multiple types of both procedural ground and flying creatures.

There are a number of fish which can only be caught on ocean planets using a Fishing Rod. These fish won't be seen swimming in the wild without a fishing lure to attract them.

There are a variety of items which are specific to chests found in ocean biomes. Some of these may have a chance of being found in other places throughout the universe, but they've all been specifically allocated to chests within ocean biomes.

Ocean biomes have two treasure pools, one for the surface and one for the ocean floor. There are a variety of items which can only be found in one area, but not the other.

Ocean surface treasure can be found on the small islands which are scattered across the surface of the water.

Ocean floor treasure can be found in chests along the ground at the bottom of the ocean.

While a number of the items found in ocean floor chests are diving masks, they're purely cosmetic and don't actually provide the player any protection from running out of breath underwater.

Some objects found in ocean biomes are tagged with the object tag ocean. There are no tenants associated with the ocean object tag.

Oceans only have a chance to have two settlement types appear. They're both Hylotl; an underwater dungeon and city. There are also a variety of small friendly dwellings which can be found on scattered islands on the ocean surface.

Note that Hylotl surface cities and ruined castles do not appear on ocean planets.