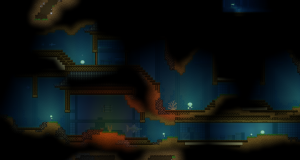 These ruins can only be found underwater on ocean planets. They won't be found anywhere else in the universe.

The ID used by the /placedungeon command is 'hylotlruinedcity' (Warning: placing a dungeon may cause some objects to disappear and animals will also appear within the dungeon)