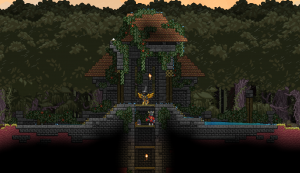 Entrance to the underground structure.
Glitch Dungeon Crawlers are a hostile Glitch themed underground dungeon made up of a series of overgrown, decayed tunnels. The construction materials and decoration closely resemble Glitch Castles, but these dungeons are crumbling, with vines and rubble all around.

These dungeons can be found on any planet type aside from moons, any ocean worlds (including magma, arctic, and toxic), or garden planets. They are most likely to appear on volcanic planets over any other planet type.

There are 2 variations of what one of the rooms in the Dungeon can be. The first one, which seems to be more common then the other, has a room with 3 Batongs, tables, and other sorts of Glitch decorations, including a lever, which opens up a secret wall, containing a small staircase to a golden chest. The second variation replaces the room before the gold chest with a hallway to a Diamond Display, but some of the floor opens upon walking onto it, making the player fall into a chamber full of Fennix.

The ID used by the /placedungeon command is 'dungeoncrawler' (Warning: placing a dungeon may cause some objects to disappear and animals will also appear within the dungeon)

If enough tagged dungeon objects are placed together with a Colony Deed a unique villager tenant can be summoned. There are a number of objects in this dungeon also found in Glitch Evil Fortresses and Glitch Castles; they share a tenant tag. The abundance of these objects in castles is much higher than it is in these underground tunnels.

See the glitchcastle tag detail page for a complete listing of tagged objects.