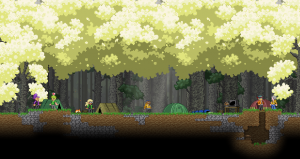 A Human Campsite.
Human Campsite is a small Human style village with several tents, some outhouses, campers, guards, and a few pets.

There are many villagers here, so you can get a number of generated quests and quickly recruit crew members.

These small villages can be found on any planet type aside from moons, any ocean worlds (including magma, arctic, and toxic), or garden planets. They don't have a specific planet type they're most likely to appear on.

The ID used by the /placedungeon command is 'humancamp' (Warning: placing a dungeon may cause some objects to disappear and animals will also appear within the dungeon)