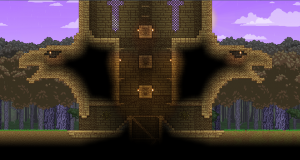 An entrance to an Avian Temple.
Avian Temples are an Avian themed dungeon that can contain mazes, traps, monsters and treasure. As of now, there are 3 major types of temple structures that generate:

Avian Temples are not well lit; it's recommended to bring a light source when exploring, or gather some torchs from within the temple.

Avian Temples are not to be confused with Avian Tombs, which has some similarities, but can be differentiated easily by their grey construction blocks. Temples were one of the earliest dungeons, playable through most of beta.

These dungeons can be found on any planet type aside from moons, any ocean worlds (including magma, arctic, and toxic), or garden planets. They are most likely to appear on jungle planets over any other planet type.

The ID used by the /placedungeon command is 'aviantemple' (Warning: placing a dungeon may cause some objects to disappear and animals will also appear within the dungeon)