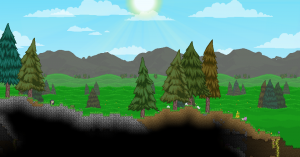 A garden biome.
Lush is a primary biome type characterized by grass and pine trees. Garden planets are a 'low' threat level, geared toward tier 1 in progression. They are the first planet type players will encounter when beginning a new game, and feature the weakest monsters of any planet type.

Lush biomes can be created and expanded using a Lush Terraformer, and a planet will convert to a Garden planet once half of the planet's surface has been terraformed into Garden biome.

Lush planets can only be found orbiting gentle (white) star types. There are no environmental hazards in garden biomes which require use of an environmental protection pack.

Lush replace a similar biome, Grasslands, that used to exist in beta versions of Starbound.

Gleap, Poptops, and Nutmidges have a chance of being found in garden biomes.

Garden biome planets can be identified by the keyword Lush in their navigation console description.

The surface layer of gardens is primarily made up of dirt, cobblestone, and mud. There's an abundance of gatherable wood because of the plentiful trees. The planet's primary color in the navigation console and while orbiting above is the primary color of the dirt found there.

Most common early game ores are found in garden biomes, with of copper, silver ore, gold and iron available near the surface.

The surface of the ground is mostly covered in grass, and the topography is often hilly with small subterranean caves. On the surface and inside caves there are frequently small pools of water.

The only sub biome which can be found on garden planets is forest. When forest appear they'll include things like their associated blocks, trees, and crops.

Gardens can also be found on a number of different planet types as sub biomes. They have a chance of being found as sub biomes on forest, desert, savannah, snow, jungle, mutated, midnight, or decayed planets.

Garden biomes have no minor biomes. However, Garden planets can have forest mini biomes like spring or mushroom patch inside forest sub biomes.

Garden planets have a much more consistent layer composition compared to other non-Barren planets.

Weather in garden biomes is mostly clear, with occasional light rain and rare rain storms. Weather happens for each planet based on the weights given to the weather types (probability is calculated by dividing a single weight by the sum of all weights); the probability for weather types on garden planets is as follows:

In addition to procedurally generated creatures, there are a variety of unique monsters, bugs and critters found in garden biomes. Some of these are also found in other biomes, while others are unique only to garden biomes. While these unique creatures have a chance to appear on garden planets, they will not all appear on each one. In addition to unique creatures, each biome has multiple types of both procedural ground and flying creatures.

Garden biomes have no exclusive costume sets, but there are a selection of cosmetic hats which can be found in Pod Chests. Commonly chests will contain plant fibre, timber, salves or bandages. 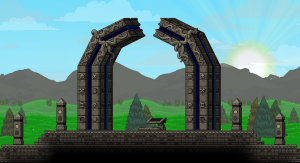 An ancient gate found on a garden planet.

Garden biome planets always have two settlements on them. A camp, where there's an entrance to a mine dungeon as well as an ancient gate which leads players directly to the outpost after it's been initially repaired using core fragments.

Each garden planet has an ancient gate which players can use to travel to the outpost when they first encounter it. In order to use it initially they'll be tasked with gathering 20 core fragments.

No villages appear in Garden biomes.

Mines are the only dungeon type which appears on Garden planets.