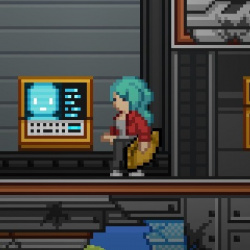 Food is a type of item that can heal the player, provide status effects and refill their hunger meter (in survival and hardcore modes) when consumed.

Food rots over time, and will eventually become inedible. Food can be preserved indefinitely by placing it inside a refrigerated storage container.

Farming is the method of growing crops, which can be both planted by the player or found in the wild. These crops can be harvested for produce, which can be consumed or used to craft stronger foods.

Most produce food grows from crop seeds, which can be farmed, harvested and replanted for a sustainable supply. Produce does not provide any helpful status effects when consumed (Toxictops and Wartweeds inflict Poisoned and Chillis inflict Burning on consumption), but will replenish the player's hunger bar. Most produce will provide the player with new cooking recipes when first harvested.

Some grown crops are only used as ingredients in other recipes, and cannot be consumed as food. These items can stack in player inventory. There are also some ingredients such as Alien Fruit, Cactus, Thorn Fruit, Mushroom and Kelp which can be harvested in the wild but do not grow from tilled soil. A variety of these crops can be 'farmed' by replanting their saplings.

In general, cooking will produce new foods with a pixel value approximately 25% greater than the sum of the pixel values of the raw ingredients involved in making the food; therefore, when it comes to selling edibles, processing them into prepared foods at a cooking station before selling them will net you 25% more pixels on average.

Meat is a basic food ingredient. Most varieties have a chance to drop from monsters and can be cooked at a Campfire.

Eating raw meat other than Raw Fish will apply Food Poisoning to the player for 60 seconds.

Each consumable food item has a rot timer associated with it which ticks down by 1 every second. If the rot timer reaches 0, the food item converts into Rotten Food. Depending on the time left on the rot timer, the food item's description will have one of these phrases at the bottom of the tooltip:

Most foods, when created, start with their rot timer at 10,800 seconds and thus should be expected to last for up to 3 hours. However, a few foods start with shorter or longer rot timers:

If a food item is placed inside Refrigerated Storage, its rot timer is paused, but if the food item is taken out, the timer begins to tick down once again.

Shop foods are ingredients which are primarily obtained from vendors (either directly from Infinity Express, vending machines and Merchants or indirectly from Terramart by buying and placing Mooshi and Hen eggs). Many of these foods won't provide status effects but will heal the player and restore hunger. They're especially helpful in early game survival mode.

The soft drinks do not replenish hunger but do apply useful buffs, and they can be consumed even while Full Belly is in effect.

In addition to cooked meats, a variety of basic recipes can be cooked using a Campfire. These foods provide hunger replenishment, and in rare cases stat boosts. None of the recipes made at a campfire will award progress toward the cooking collection; however, cooking Boiled Pearlpeas unlocks the recipe for Pearlpea Broth, which is part of the collection.

For a full list of items that can be cooked at a Campfire, see Campfire/Recipes.

Most food is separated into tiers based on the effects they provide, the series of unlocks required to learn the recipe, or the planet level of the base ingredients. All collection recipes are made using a Kitchen Counter.

All food provides the same amount of healing while full belly stays applied, which is 100% of the player's max HP over 120 seconds. Each food item can also replenish different amounts of hunger in survival and hardcore modes, but because players don't gain full belly without a full hunger bar they can stack status effects differently. (The food bar in survival and hardcore modes has a maximum value of 70 hunger points.)

Almost all prepared foods as well as Eggy Toast, Potato Grids, and Roasted Mushrooms inflict Status Effects in addition to filling your character's stomach. Harmful status effects, including Burning and Poisoned, always have a 5-second duration. Helpful status effects, such as Jump Boost, have a duration which is proportional to the amount of hunger restored by the given food item. Specifically, for a food that restores X hunger points and grants Y helpful status effects, the duration for each helpful status effect is (9*X/Y) seconds, rounded to the nearest integer if the resulting duration is not already an integer. The only exception to the rule, Shepherd's Pie, has a single buff with a duration of 375 seconds; when compared to its hunger restoration of 75, it is apparent that the buff duration in this case is only 5*X rather than the expected 9*X.

Each prepared food in game will complete an entry in the 'Cooking Collection' after it's been made. The numbers beside each food below correspond with their entry inside the collections library.