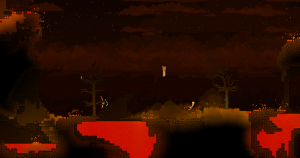 The surface of a volcanic planet.
Volcanic is a primary biome type characterized by intensely hot temperature with hard scorched Magmarock, ash and scattered pools of lava. Volcanic planets are an 'inconceivable' threat level, geared toward tier 6 in progression. It is similar in appearance and temperature to Magma planets, but doesn't have oceans of lava. Glitch settlements have a higher chance to appear on volcanic planets.

Volcanic planets can only be found orbiting fiery (red) star types. Unless players have a Cooling EPP Upgrade equipped they'll take increasing damage while on the surface from deadly heat.

Possible mini biomes inside volcanic biomes are foundry, which has workers slaving away over hot lava forges, geode, desingished by its glowing crystals, and bones with piles of dry bones scattered in piles.

Crabcano, Crustoise, Fennix, Ignome, Peblit, Pyromantle, Scandroid and Smoglin have a chance of being found in volcanic biomes. Volcanic planets are the most common planet to find Glitch villages and dungeons, they are found there more than any other planet type.

Volcanic biomes use their own sets of music tracks for day and night. 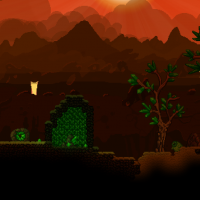 Glowing crystals can be found in geode mini biomes.

There are sub biomes which can be found on volcanic planets in addition to their unique mini biomes. Midnight, desert, decayed, or forest have a chance to appear as smaller biomes on volcanic planets. These biomes will include things like their associated blocks, trees, and crops when they appear. Mini biomes for each of these secondary biome types can appear inside them as well.

Volcanic can also be found on decayed planets as a sub biome.

Volcanic planets stick to the standards for planetary layer composition.

Weather on volcanic planets is either clear with a chance of cinder showers or light ashfall, or clear with a chance of cinder showers, in addition to small or large meteorites. Each magma planet has one of these two pools of weather, and it will not change. Magma planets without a meteorite shower chance will never have meteor shower weather and cinder shower weather has a chance to appear on all volcanic planets. Cinder weather will burn and destroy structures made with wood material.

Weather happens for each planet based on the weights given to the weather types (probability is calculated by dividing a single weight by the sum of all weights); the probability for weather types on volcanic planets is as follows:

Chilli plants can be found on magma planets. They'll drop produce and have a chance to drop a seed which can be replanted.

In addition to procedurally generated creatures, there are a variety of unique monsters, bugs and critters found in volcanic biomes. Some of these are also found in other biomes, while others are unique only to volcanic biomes. While these unique creatures have a chance to appear on volcanic planets, they will not all appear on each one. In addition to unique creatures, each biome has multiple types of both procedural ground and flying creatures.

Volcanic Chest is related to this biome, and has a number of unique drops allocated to it.