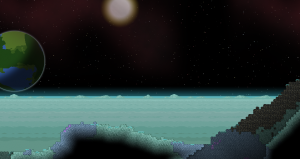 The surface of a moon.
Moon is a primary biome type characterized by dead airless worlds with no plants or life. Because moons have no atmosphere there is no color in the sky, simply a view of nearby planets and stars day and night. Moons are an 'Unknown' threat level, the ghosts on moons are deadly to players at all progression levels. Aside from ghosts there are no other dungeons, monsters or enemies to encounter.

No Music Tracks play while the player is inside a Moon biome, though ambient noises still occur.

The primary reason to travel to moons is to gather fuel for ship travel. There's an abundance of glowing Crystal Erchius Fuel and Liquid Erchius Fuel located on moons. Most systems has a moon, usually orbiting a larger planet type. Because moons can be found in almost every system, the situation where players will be stuck in a system unable to gather the fuel required to leave is usually small, as the systems that do not have any moons usually have an Ancient Gateway in them. (See Stars for exact information on the chances of moons appearing in a given system.)

Moons can be found orbiting all star types. Unless players have an Breathing EPP equipped they'll slowly run out of air while on moons, with S.A.I.L. warning the player that they're suffocating, and eventually taking damage when they've completely run out.

Erchius Ghosts are the only unique monster found on moons. While on the surface players will have the spooked debuff, which draws ghosts toward them.

Moons can be converted by using Terraformers, and upon converting removes the risk of Erchius Ghosts from spawning permanently.

The surface layer of moons is primarily made up of moondust, along with moonrock and moonstone. The color of the moon in the navigation console closely matches the hue the materials on the moon will have.

Moons do not have a lava core; instead, their cores are made of very hard stone called Dead Core. When you are deep down and your camera will not go any further, you are at the core. If you touch the bottom edge you'll die instantly, but due to how tough Dead Core is, it would take a very long time to even reach the bottom edge of the world.

Moon planets do not have any sub biomes which appear, and moons do not appear as a sub biome on any other planet types.

There are no mini-biomes found on the surface or underground on moons.

Moons have a fairly boring layer composition, though unlike Barren planets, it's very hard to accidentally tunnel down to death at the bottom of the core.

Weather on moons is either clear, glowing rain, or meteor shower. Weather happens for each planet based on the weights given to the weather types (probability is calculated by dividing a single weight by the sum of all weights); the probability for weather types on moons is as follows:

There are no wild crops unique to moons, and since there are no mini or sub biomes there's no chance of finding any crops of any kind on the surface.

There's only one monster type found on moons; Erchius Ghosts. These monsters are unique to moon biomes, and cannot be found on other planet types. They'll pursue the player, draining life if they get too close. They cannot be killed, but move slowly enough so they can be avoided. The more fuel the player collects, the faster they move. With about 3000 Items of fuel, they move about as fast as the player running on foot. They ensure players get in, get their fuel, and quickly exit moons.

There are no critters or bugs which can be found on moons.

There are no drops unique to moons.

There are no villages or dungeons found on moons, they're too harsh to support any type of settlements.

No village types have a chance of being found on moons.

No dungeons can be found on moons.