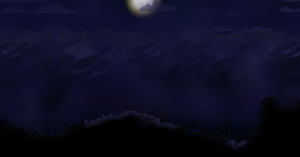 A midnight biome, which is perpetually dark
Midnight is a primary biome type characterized by dark trees, dark obsidian and ash. Midnight planets have no daylight, and even though there may be a sun visible in the sky the planet remains clouded in darkness day and night. Midnight planets are an 'extreme' threat level, geared toward tier 5 in progression. There are small structures, populated by strange shadow humanoids.

Midnight biomes can be created and expanded using a Dark Terraformer, and a planet will convert to a Midnight planet once half of the planet's surface has been terraformed into Midnight biome.

Midnight planets can be found orbiting frozen (blue) and fiery (red) star types. Unless players have a Heating EPP Upgrade equipped they'll take increasing damage while on the surface from deadly cold. A Cooling EPP Upgrade also will protect against the planet's cold.

The surface layer of midnight biomes is primarily made up of tough obsidian, along with ash, and cobblestone. There's gatherable wood from the dark trees which also drop plant fibre. The planet's primary color in the navigation console is always black, and so is the obsidian it's made from.

Midnight biomes, due to being in perpetual darkness, use a unique set of tracks for both "day-time" and "night-time". 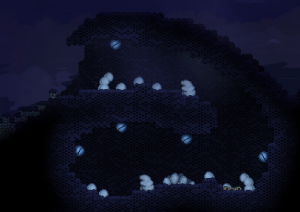 A small nest inside a hive mini biome.

There are sub biomes which can be found on midnight planets in addition to their unique mini biomes. Desert, tundra, forest, snow, and barren have a chance to appear as smaller biomes on midnight planets. These biomes will include things like their associated blocks, trees, and crops when they appear. Mini biomes for each of these secondary biome types can appear inside them as well.

Midnight biomes can also be found on a number of different planet types as sub biomes. They have a chance of being found as sub biomes on tundra, volcanic, and decayed planets.

Both hive and bioluminescence mini biomes have luminecent features, making them easier to spot in the darkness of the planet.

Midnight planets stick to the standards for planetary layer composition.

The probability for weather types on midnight planets is as follows:

Boltbulb and Diodia can be found growing wild in midnight biomes. These can be harvested by interacting with them or by digging them up. They'll drop produce and have a chance to drop a seed which can be replanted.

In addition to procedurally generated creatures, there are a variety of unique monsters, bugs and critters found in midnight biomes. Some of these are also found in other biomes, while others are unique only to midnight biomes. While these unique creatures have a chance to appear on midnight planets, they will not all appear on each one. In addition to unique creatures, each biome has multiple types of both procedural ground and flying creatures.

The Dark Disguise Set found in chests is a shade lighter than the Dark Set worn by shadow villagers, but shares the smokey effect when worn.

Midnight biomes can have a large variety of settlement types found on them. These include small microdungeons and NPC camps, larger racial villages and hostile dungeons. Smaller midnight planets usually contain only one dungeon or village, while midnight planets can contain as many as three.

Many small microstructures exist on the biome surface, commonly populated by shadowy figures.