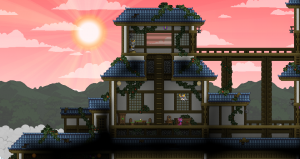 They can be found on any planet type aside from moons, any ocean worlds (including magma, arctic, and toxic), or garden planets. Ruined Castles don't have a specific planet type they're most likely to appear on.

The ID used by the /placedungeon command is 'hylotlruinedcastle' (Warning: placing a dungeon may cause some objects to disappear and animals will also appear within the dungeon)