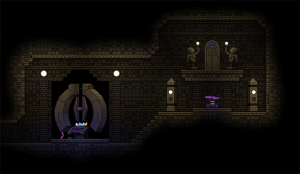 The end of a vault, which holds a Terraforge and a Weapon Upgrade Anvil.
Ancient Vaults are a procedurally generated endgame dungeon type. Access to them is unlocked with ancient keys, which are sold by the mysterious trader at the Outpost after completing the final quest of the main story.

Once the main story is completed, the mysterious trader will offer a new quest: The Final Frontier. After accepting this quest, the player will be able to trade various crafting materials in exchange for Ancient Keys. Ancient keys can be used once to unlock a dungeon at an Ancient Gateway, found at the edge of many solar systems.

Using the Ancient Console at an Ancient Gateway while a key is in your inventory will allow you to activate a temporary portal to an Ancient Vault. This portal will close after 30 minutes or if the console is used to close the portal; if the player does not enter the Ancient Vault before this time or is defeated after it closes, another key will need to be used in order to open a portal to a new Ancient Vault.

Ancient Vaults are not associated with the gate that the player uses to access them. The same gate can open portals to a number of different dungeons when a Vault Key is used.

While inside an Ancient Vault, players do not experience depletion of their Hunger bar, can beam to their ship at any time, and do not drop items on death.

Ancient Vaults are procedurally generated, possess a difficulty Tier of 8, and have one of four elemental themes: fire, ice, electric or poison. The elemental theme determines the types of rooms and monsters that will appear in the Ancient Vault; this also influences the types of weapons that are most effective due to the resistances and weaknesses of the monsters. However, most of the Ancient Vault is composed of ancient blocks and other ancient architecture.

Ancient Essence is a unique currency found only inside of Ancient Vaults. It glows purple and emits light after dropping. It drops from slain monsters in quantities of 7-13 at a time and falls out of broken pots in quantities of 1-4 at a time depending on the sizes of the broken pots. Ten packets of 8-12 essence each are flung out from vault chests when they are opened. Additionally, Vault Guardians (detailed below) drop 1250 essence in packets of 25 when defeated.

Unique monsters in Ancient Vaults always drop 7-13 Ancient Essence; in addition to this, they will drop nothing (80% chance), one of their characteristic monster drops (19.88% chance), or their Action Figure (0.12% chance). 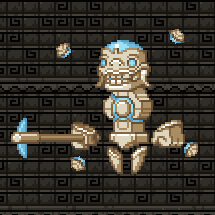 A variation of a Vault Guardian
Guardians are procedurally generated bosses which are found at the end of each vault. Ancient Guardians and their minions, unlike other monsters in the vault, are Tier 7 monsters.

Every guardian has a name reminiscent of ancient Greece, and is associated with one of the four types of elemental damage, indicated by the color of their glowing parts. Specifically, fire, poison, ice and electric guardians have orange, green, blue and purple glowing parts, respectively.

Like other procedural monsters, Ancient Guardians are assembled using different pieces; there are many variants of head, body, and weapon parts, and guardians can use a variety of special attacks, which are chosen on generation. Most have small summoned minions and a personal shield which must be deactivated in order for the player to be able to deal damage to them. Several types of shields exist which must be deactivated in different ways, and some guardians have no shield at all; these guardians often have very high amounts of health to make up for not possessing a shield.

Ancient Guardians are immune to all Status Effects that can be inflicted by players. In addition, they possess a resistance to damage with an elemental type identical to their own. Specifically, Fire Guardians, Poison Guardians, Ice Guardians, and Electric Guardians take 50% less damage from fire-type, poison-type, ice-type, and electric-type weapons, respectively.

The door to the boss room is a one-way door, forcing one to defeat the boss in order to open a doorway on the opposite side. The strategy for defeating a given guardian varies based on the set of attacks used by that guardian as well as by the kind of shield (or lack of shield) possessed by the guardian. After defeating the guardian it will always drop 1250 Ancient Essence; in addition, it has a 50% chance to drop a random mini-biome terraformer. Defeating the guardian will open a door that leads to a room with two unique crafting stations, which only appear at the end of Ancient Vaults.

One of six ancient mural pieces is found at the beginning of each Ancient Vault. This is their appearance when edited together.

When a player enters an Ancient Vault, a piece of a mural can be found near the entrance. The mural has text in the ancients' language. Six different pieces can be found, which can be combined to reveal a full message that translates into the following text: