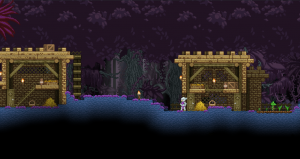 These villagers live simple lives, farming and selling wares. Inside most Avian Native villages is a large temple which closely resembles a hostile Avian Temple dungeon, but is friendly. When searching for clues in or near the temple is where clues are most commonly found.

These villages can be found on any planet type aside from moons, any ocean worlds (including magma, arctic, and toxic), or garden planets. They are most likely to appear on jungle planets.

The ID used by the /placedungeon command is "aviannativevillage". (Usual placedungeon warning: manually placing a dungeon on an existing world may cause existing objects to disappear, and existing NPCs or monsters may appear within the dungeon.)