Quests are objectives given to the player that provide rewards as well as story progression. There are a number of pre-designed Quests that center around the game's main story in addition to a procedural quest system which generates smaller side quests.

Most main story quests revolve around characters at the outpost, which serves as the game's main quest hub. Procedural quests can be encountered in villages, in some Microdungeons or from tenants which are summoned to structures with a colony deed. 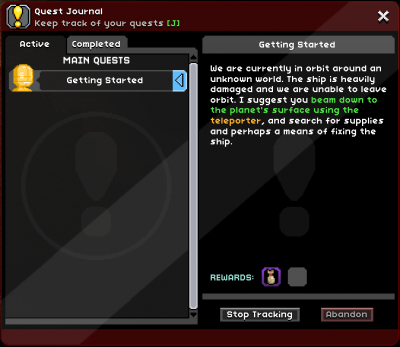 Missions are pre-built encounters that usually culminate with a boss encounter. They involve multiple quests, and allow advancement into game progression.

Most missions can be visited at any time after the initial quest is received using the ship computer. One set of notable exceptions is the three arena quests offered by Nuru - the only way to access the arenas is to get Nuru to beam you to them, and these arenas become inaccessible once their quests are completed. Other notable exceptions include the optional introduction mission (cannot be revisited once completed) and The Ruin (cannot be accessed from the ship, only by using the Ark portal).

Main Story and Side Quests

The navigation box below lists the game's premade main story and side quests. Unlike procedural quests, most of these have prerequisite quests which must first be completed before players are eligible to receive them.

Following the main story questline will require players visit a variety of planet types and explore in addition to clearing dungeons and defeating bosses. There are many methods to progressing through the games systems to become powerful enough to advance; farming, dungeon-crawling, or being a landlord will all give opportunities to progress through quests.