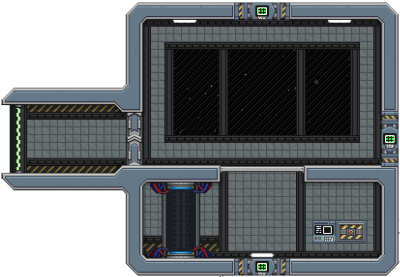 Space Stations are high-tech structures found orbiting Stars alongside Planets and Asteroid Fields, populated by NPCs, and accessible to the player only via Mech deployment.

Any star can have a Station orbiting it, but not all stars do.

Eventually, the player is given access to the Station Transponder, which allows the player to place their own Station in orbit around a Star, and from there the Station can be expanded and redecorated to the player's liking.

NPC stations are friendly environments populated by NPCs of all player-races. They are a valuable source of new decor items to scan and storage devices to loot (which may include unique decor items), plus they offer unique features for the player.

These stations fall under one of four different types: food supply, medical, electronic, and weapon stations. Each station has a vendor waiting near a lit sign, selling station-appropriate trade goods and buying one of the other three types. The vendors buy goods at a higher rate then what they sell, giving the player the opportunity to make some quick Pixels by buying and selling goods across different stations.

Red-armored vendors in NPC stations offer the "Your Very Own Space Station" Quest. By meeting their trade requirements, they hand over a Station Transponder, which allows the player to summon an expandable space station into the star system of their choice.

NPC stations are shielded environments, so players cannot place or remove blocks or objects, including flags. As such, the only way to return to a specific NPC station is to fly to it.

When using the station transponder in a star system, a dialog prompts the player to choose their new station's orbital path. This orbit must be clear of obstacles and cannot be too close to a planet or Asteroid Field. Once a stable orbit has been chosen, the new station is summoned and will arrive in moments. Closing the Transponder screen before the station has successfully arrived will cancel the deployment.

The Transponder is consumed upon successful deployment of the station. If the player wishes to make another station, they must seek out a transponder vendor and make another trade.

Each new player station starts with a single room, with a mech bay on the left side, and Expansion Slots on the top, right, and bottom hulls. The lower area contains a teleporter, Space Station Console and an Industrial Storage Locker.

The background walls can be removed and replaced with the Matter Manipulator. As with the player's ship, the outer hull walls and pre-set devices cannot be altered in this fashion (not within normal gameplay means, see below).

Players can interact with the Expansion Slots located at the passage points between sections. Rooms which are available to be attached to the expansion slot will be listed and highlighted green, those which can't be connected are highlighted red and sorted to the bottom of the list.

An expansion room can only be built if all of its borders connect to matching doors or empty space. For example, a Core room (possessing doors on all four faces) cannot be built in a tile if a horizontal hallway with no lower connection lies above.

The following table lists all expansion rooms and illustrates their appearance in Starbound. Hovering over each room will display the materials required for construction.

There is no "normal" in-game method of changing your space station's outer hull via the Matter Manipulator, as you would most other builds. However, by using admin mode commands, you can turn off the protections of a space station and alter its blocks, allowing you to shape the station any way you wish. 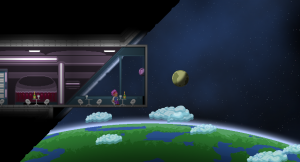 Early in Starbound's development, the Space Station was effectively the player's Ship, an upgradeable structure that the player would populate with crew and creatures to train. The Station was a large area, with room for many players to congregate. PvP was announced disabled on Space Stations, making them 'safe zones'.

Tiy originally released a few screenshots of him exploring the Space Station, hinting that it may be added to the game as a future feature. He suggested it would unlock far into game-play for guilds or clans, and allow them to have a "guild hall" type common area.[1]

This concept was quickly replaced by the upgradable ships, and the "guild" ideas abandoned.

The Bridge was the topmost deck, where the player would navigate the space station to planets using the star map.

The hangar originally was designed to house dropships that would ferry players and materials to the planet surface. This was later replaced with beaming.

The research lab resembled the area which later became the Apex Facility structure.