From Starbounder - Starbound Wiki
(Redirected from The Ruin)
Jump to: navigation, search 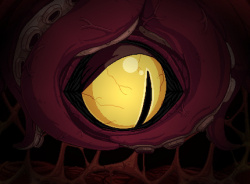 The Ruin is the final boss of the game, found at the end of Opening the Ark quest. Defeating it completes the main story.

Once you go through the now opened Ark portal and arrive on the surface of the Ruin, you receive a radio message from SAIL:

The Ruin is located at what is normally the core layer of the planet, which is found after mining to the bottom, ultimately contained within the common boss-type arena. The Ruin as a whole is the size of a Very Small planet, possessing a circumference of approximately 1,000 blocks.

Settling on The Ruin is not recommended, as it is still an instanced mission and will randomly regenerate every time you return to it. 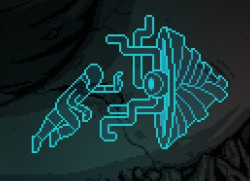 The Ruin is composed of Tentacle Cluster, Jelly Blob, and Obsidian blocks; tentacle trees; and abundant pools of Poison. The environment is overrun with various flying and crawling monsters with large eyes, which are considerably weaker than tier 6 monsters. Unlike with other missions, the food bars of Survival and Hardcore players will still deplete while on the Ruin.

As one approaches the bottom of the outer layer, SAIL sends another radio message:

Unfortunately, the only way to reach final boss stage of the Ruin is to traverse this chasm. There are a number of ways to reduce the fall damage taken on the way down, but the quickest is loosen some Jelly Blobs and hitch a ride on them.

The brain is made of brain blocks which are very hard to destroy. One will also notice that these brain blocks will sometimes light up in a fashion reminiscent of brain activity.

While approaching the boss chamber, Esther Bright sends you a radio message:

The boss fight against the Heart of the Ruin takes place in a completely flat room. Before the boss, you're faced with a rematch against Asra Nox. The room does not change in layout at all when the Heart of the Ruin "wakes up", however, two spawners activate, which will periodically send flying and exploding eye enemies at you. 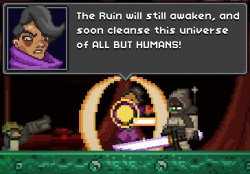 The eye in the Heart of the Ruin will charge up a laser and fire it in front of itself (the center of the arena), dealing heavy damage in a conical area. The area where the laser will strike is displayed several seconds beforehand. One thing to note about this attack is that it will hurt enemies that get caught in the blast, so you can use it against enemies spawned by the "Spatial Sunder" attack.

A large "portal" displaying a biome type will appear over the Heart of the Ruin's eye, and multiple smaller portal projectiles will shoot out from it. These portals, upon colliding with the walls and floor of the arena, will summon monsters unique to the biome displayed in the large portal.

The boss has a large hitbox and doesn't damage you on contact, so if you have a sustainable way to reach the boss's hitbox, feel free to go melee. The Asuterosaberu DX (Or the Protector's Broadsword) and the Kluex Staff are great weapons against it. The Heart of the Ruin has a lot of health, and even though its attacks are heavy hitters, most of it can be mitigated by simply moving away. A lot of the damage you'll receive will probably be due to the enemies that spawn, so if you can effectively dodge them or kill them, you'll have a better chance at the Heart. You can also gather the enemies in the center of the room when the eye blasts the floor, which will kill them. Using the Blink Dash and the Multi Jump tech is great for this battle, especially when it uses its Eruption attack. The best way to go about this boss is to just keep whittling the Heart's health down and avoiding the attacks from the biome monsters it spawns until it self-destructs.

While approaching the bottom chasm, the game's code contains a radio message from Koichi that would be received after SAIL's message. However, only SAIL's message is played as of version 1.1.1.

While approaching the boss, the game code contains a radio message from Tonauac that would be received after Esther's message. However, only Esther's message is played as of version 1.1.1.

In the intro, the game's code contains two more radio messages, one from Esther Bright and another from Lana Blake, which would be received after SAIL's radio message. However, only SAIL's message is played as of version 1.1.1.

The Ruin is a hateful being of destruction that tried to wipe out the entire universe millennia ago. It would have succeeded, but the Cultivator fought the Ruin, sacrificing itself to seal the ruin in the Monolith Gate that was constructed in the Ark. In the beginning of the main storyline, the Ruin's attempt to escape its interdimensional prison leads to the destruction of Earth, starting the player's journey to destroy it once and for all.

According to research done on it by the Occasus, the ruin is in fact a centralized hivemind, with its spawn serving as remote limbs and eyes for the main body itself, it is also capable of cross-dimensional travel, presumably a means of FTL while it was unimpeded.