Lana Blake takes no quarter in the fight against the Miniknog. This no-nonsense Apex revolutionary is a master tactician and helps run black-market goods between rebel camps, but she's not the sort to merely sit behind a desk and lead from the back.

Lana is often right up front leading the charge against heavily-armed Miniknog installations, cool scarf flapping in the wind as she sprays the battlefield with hot lead. Despite these overwhelming odds, she keeps coming out alive and on top. She has completely devoted her life to toppling the oppressive Apex government.

Rather unlike many Apex, Lana can't stomach bananas.

Lana is first encountered at the Miniknog Stronghold as the player attempts to fetch the Apex Artifact for Esther Bright. She leads an Apex rebel commando team through the main grounds in a raid, but cannot progress unless the player opens the numerous gates in the way via switches in the underground maze of labs and sewers. Though she is able to make it to the main building, she is wounded in the fight and needs the player to push ahead, leading to a fight against the "Big Ape" figurehead.

Following the destruction of "Big Ape", Lana makes it underground, where the Apex Artifact is kept. She has no interest in the bauble, and is more than happy to let the player take whatever they want from the lab... and is so thankful for their assistance in this victory that she offers her aid going forward. 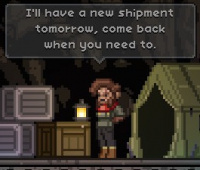 Following the raid, Lana sets up camp at the Outpost, just outside the Ark. There she uses her network of suppliers to move a constantly-changing stock of random EPP Augments. Lana's stock changes every 24 hours at 12am UTC, the same time as Tonauac's blessing.

During the "Fetch the Glitch Artifact" Mission, Lana and Nuru arrive to fight back the hordes of Occasus Cult members attacking The Baron's Keep. Lana sticks with her tried-and-true Assault Rifle, which can be effective in finishing off groups of weakened enemies. However, they will limit their attacks to the ground-based Cultists, leaving the player to deal with any Helicultists or remaining Ballistas.

Nuru and Lana will telport back to the Outpost when The Baron calls the all-clear. Unfortunately, this means the player is forced to deal with the colossal Bone Dragon (and the Cultists accompanying it) by themselves.