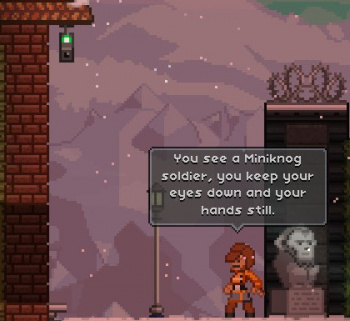 The Miniknog is the oppressive government of the Apex and the main antagonist in the quest to Fetch the Apex Artifact.

The player will encounter the Miniknog as the dominant power at Apex Test Facilities, Apex Miniknog Bases, Apex City Apartments, and at the Miniknog Stronghold. The Miniknog “leader”, Big Ape, is supposedly an all-powerful, godlike Apex-ish being who is constantly lionized by Miniknog propaganda. Despite what most Apex have been lead to belive all their lives, Big Ape is actually a fake. It is unknown to the player who is truly at the top of the Apex hierarchical pyramid, other than that it is (likely) an oligarchy, a ruling council. In the Miniknog Stronghold mission, the player must fight a holographic projection of Big Ape as a boss. The Miniknog is out-of-power at the Apex Rebel Camps, though. The Apex are the only race in the game with a full blown internal conflict.

Players must fight the Miniknog in a mission assigned by Esther in order to complete the main storyline of Starbound. To complete this quest, the player must defeat Big Ape.

As the Miniknog is a brutal government that is truly based upon an immense fog of lies and propaganda, there is a universal movement, the Apex Rebellion, that is bent upon overthrowing Miniknog rule. Anti-Miniknog rebels can be found in Apex Rebel Camps. Compared to the Miniknog’s highly advanced weaponry and tactics, arguably the best in the known universe, the rebel arsenal seems a bit primitive. Despite this disadvantage, the resistance is still holding up. Lana Blake is one of the most important figures in the resistance movement.

A number of anti-Miniknog-themed decorative objects are available.

A number of Miniknog-themed decorative objects are available.

The Miniknog are the subject of a number of the codex entries discovered by the player.