The Occasus Cult is the primary antagonist group in Starbound. Led by Asra Nox, Occasus Cultists are xenophobic humans who seek to wipe all other races from the universe. To this end, they hope to channel the destructive power of The Ruin, despite the threat it poses to all life, human or otherwise.

No-one has accused them of being smart. Nox herself privately muses that her charges are largely a group of morons who don't comprehend the truth behind her actions, but they are at least driven and loyal morons. Their technology is often primitive, Glitch-level affairs, and even their spaceships are decrepit and outdated.

But Nox is certain that even with this motley crew, she can achieve her goals.

Every encounter with members of the Occasus Cult is violent. Cultists will always attack the player (and player-friendly NPCs) on-sight. Their attacks vary depending on the type of encounter.

Any planet with microdungeons has a chance of spawning a small Occasus Cultist camp, typically with three Cultist NPCs to deal with. The camps are very simple, either just handful of Metal Crates (sometimes containing small amounts of treasure) and a lantern, or a single Campfire. These camps can be found both on planetary surfaces and underground.

Hostile ships encountered in space have a chance of being an Occasus ship, manned by multiple Cultists. These purple ships have a few unique decor items to scan, including the Cultist Door, Environmental Data Panel and Space Heater. Chests within the ship's bridge typically contain the Occasus Mech Body mech blueprint.

An organized crime branch of the Occasus known as the Apocalyptic Occasus Cult is the specific criminal gang the player will face during the Going After the Occasus bounty quest line.

Cultists are encountered as the primary obstacle in the Grand Pagoda Library, but thankfully in small groups scattered throughout the Library. This mission ends with a fight against the cult leader Asra Nox.

A pair of Cult members somehow manage to get deep into the Great Sovereign Temple, down in the lowest and most dilapidated level, but pose little threat.

The Cult comes out in force at the Baron's Keep, where the player has to fend off wave after wave of Occasus Cultist Invaders and armored Occasus Cultist Knights in order to protect the Regal Medallion (the Glitch artifact). Aside from these cultist knights, Occasus Cultist Archers will launch flaming arrows at the player, Helicultists will drop Molotovs on the player, and some will push heavy Ballistas towards the keep in order to break down its walls. Several more Cultists back up Asra when she arrives on the final boss of the mission, the Bone Dragon.

Though Asra has (somehow) made it to the inner chamber of The Ruin ahead of the player in the "Opening the Ark" quest, she is thankfully alone.

The last mission to involve the Occasus is The Dantalion in which the player uses their mech to navigate the Occasus mobile HQ and warship, Dantalion. It is where the player faces Asra for the last time as she dons the The Swansong mech suit. 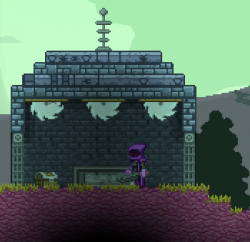 The pre-1.0 Cultist in one of the Cultist microdungeons no longer in the game.

Cultists had no story significance or lore attached to them in the Beta builds of Starbound, appearing solely as random encounters on planets. Just as now, they were always hostile and would attack the player and other NPCs on-sight.

In the "Koala" builds, Cultists had glowing red eyes visible through their hoods, and were attached to several microdungeons:

These microdungeons were all replaced by the first "Giraffe" Beta build of the game when the universe was re-vamped, with the random encounters brought basically to their current state. The Cultists also changed visually to remove the glowing eyes and make the hood profile more sinister-looking.