A holographic depiction of the Cultivator holding up two planets.

The Cultivator was the ancient force of balance and order in the Starbound universe. It existed for aeons before the rise of the Ruin, and under its influence, harmony reigned. With the rise of the Ruin, however, the Cultivator was forced into a fight for the survival of the universe. Although it was able to seal the Ruin away from the rest of the universe, it exhausted all of its energies doing so. This caused it to be destroyed in the process.

Before the Cultivator dissipated altogether, it gifted six chosen races with powerful artifacts. These were the Hylotl, Human, Avian, Floran, Apex and Glitch races (every playable race except Novakid). These artifacts, when all placed in the gate to the Ruin, will open the way, allowing the Ruin to be defeated for good.

The Cultivator is depicted as humanoid, and is implied to be astronomically large, being depicted holding or looming over planets and galaxies. Whether it actually was such a form, or if it had any physical form at all, however, is not established. There is a theory that the Ancients worshiped it as a god, or possibly even could commune with it on a higher level than other beings, but that they only personified it in their religion and it was a mere force. This has yet to be proven, however. The Cultivator is largely depicted as the latter at the Ark. It's also possible that the Cultivator was simply revered as some great leader to the Ancients rather than a deity-like figure, but they evidently held great respect for it.

It is unknown if they created the universe or not within Starbound's setting, but the moniker of Cultivator implies a more custodial role than a creative one. Much as the Ruin's name clearly describes a destructive intent. 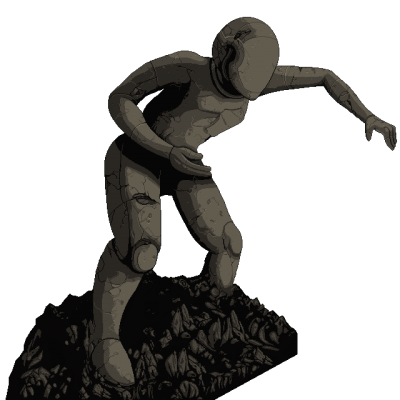 A huge statue depicting the Cultivator. This statue is found looming protectively over the Monolith Gate at the Ark.
Retrieved from "https://starbounder.org/mediawiki/index.php?title=Cultivator&oldid=191647"