There are 6 artifacts to be located, fought for, and found/gained (physically) by the player. Each artifact is gained at different times in the game and at different places, and most crucially, from the 6 different races. These 6 races have been mentioned in the Cultivator page as gifted races that have been chosen to be given each a powerful artifact. When all these 6 artifacts have been gained by the player, they will be separately slotted into the six ready-made cavity's in Monolith Gate (which stands behind Esther at The Ark) displaying an array of colours ranging from red all the way down to blue (each artifact is a noticeably different colour).

As mentioned above, to gain any one of these artifacts, it requires a challenge of some sort. The challenge usually starts with the player having to get through an "obstacle course" of some sort (for example, to gain the green Floran artifact, you must make your way through the Ceremonial Hunting Caverns) which then leads up to the lair of one of the many Mission Bosses (excluding The Ruin). In the case of the Floran artifact, the boss at the end of the Ceremonial Hunting Caverns is Ixodoom. Once the boss is defeated you will be prized with one of the 6 artifacts.

Each time a artifact is gained you will go back to Esther and you will be given a Reward Bag and a perhaps a new quest for the next artifact. If you have finally gained all of the artifacts by doing all of the corresponding mission :

once they are all slotted in Monolith Gate, it will give access you to the next and final main quest "Opening the Ark" from Esther and a portal leading to the lair of the final boss, The Ruin. 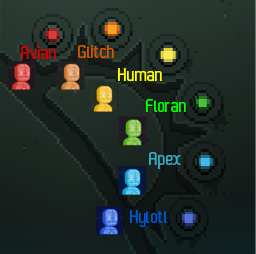 The 6 artifacts, and the names of each of the 6 gifted races that hold each artifact.
Retrieved from "https://starbounder.org/mediawiki/index.php?title=Artifact&oldid=191531"