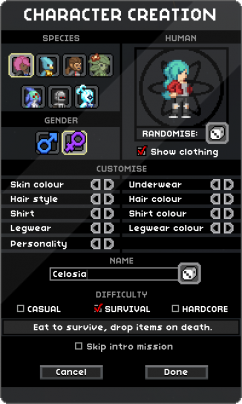 The Character Creator is the UI window to setup a new character in Starbound. This is where the player selects a race, gender, and customizes the elements of their base appearance, Then give them a name. There are seven different playable races currently; The Apex, Avian, Floran, Glitch, Human, Hylotl, and Novakid. Each have their own unique ship and armors, as well as racial skills that you can unlock as you progress through the game. You will also be able to choose between the three different game modes; Casual, Normal, and Hardcore, Choose wisely they determine what happens if that character dies in-game, you may lose pixels, ore, or even that character if you are in hardcore. Once a game mode is selected for that character it cannot be changed. 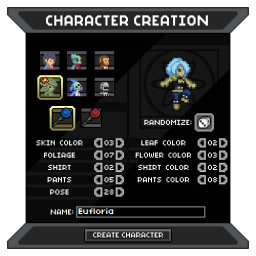 The online character creator has the ability to choose an extensive selection of poses that will almost certainly not be in game. This is to make it easier for users to publish characters 'in action'.

This web-based creator also has the ability to publish character models to image files.

There are hidden options included in the web-based character creator, some of which are still unknown. Tiy confirmed there are six easter eggs to be found. So far the community has uncovered three.

The easter eggs so far show custom armor sets based on entry of a keyword in the name field.