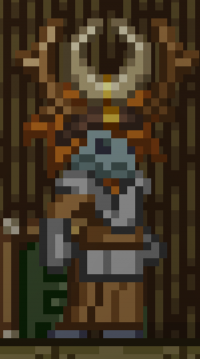 Greenfinger is the title given to special Floran who serve as their tribe's leader. Only one Greenfinger is born to a tribe at any time.[1]

Despite the Florans' brutal culture, Greenfingers are rarely the strongest hunters among the tribe. They are instead more intelligent (and patient) than the average Floran, and bear a unique gift: the ability to mentally manipulate and control plant life. Most importantly, they can do so in a manner that allows their plants to interact with higher technology, rendering machines as complex as teleporters usable and reproducible by the Floran.[2]

Thanks to this gift, even young and inexperienced Greenfingers are revered by the rest of the tribe, and their commands are obeyed... though sometimes grudgingly, as Greenfingers tend to gently push the stubborn Floran towards being more civilized (or at least distract them away from their more violent tendencies), which doesn't always sit well with the impulsive plant-people.

Each Floran Treetop Village and Floran Hut Village has one Greenfinger NPC, designated by their fancy headdress. Unlike most friendly NPCs, Greenfingers do not give Quests and therefore cannot be brought on as Crew.

Players can find the Greenfinger's Headdress Cosmetic Armor in storage devices within Floran villages, and pretend to be a Greenfinger, though.

In early development of Starbound, "Greenfinger" was an individual who frequently "appeared" in Codexes. Depicted as a brilliant yet amoral-at-best scientist who was sort of the leader of the Floran, he was in league with Big Ape and the Avian Thornwing as part of a vague and ultimately-unexplained grand conspiracy. However, it was indicated that his goals reached beyond theirs and he would likely betray them. In particular, he found Big Ape an oafish lug who was useful in providing test subjects but unpleasant to be around. It was hinted he also tied into the emerging Agaran threat or the tentacle beast that destroyed Earth, plus there was his use of Drysap on his own people for goals undetermined.

Virtually all of this was done away with during the "Rampaging Koala" update, which revamped most of the game's lore. Greenfinger's genetics skills were re-translated into a plant-controlling gift given to individual Floran, merged with early Codexes' notes that tribe leaders could encourage plant growth to build their treetop villages.