The Baron is a Glitch of a thousand tales of grand adventure and dubious veracity. A noted eccentric, The Baron bounces across the universe righting wrongs (and unintentionally wronging rights) as the mood takes him. His career as an adventurer is long, glorious and contentious, with him being hailed as a hero or reviled as a nuisance in varying locations across the universe.

Currently, The Baron is enjoying retirement among his collection of treasures. But perhaps the right adventurous sort could pull him out of retirement for one more grand quest....

The player is sent to The Baron's Keep in the "Fetch the Glitch Artifact" Quest, as it appears he is in possession of the Glitch Artifact Esther Bright needs. The Baron greets the player warmly but refuses to hand over the shiny bauble, until his Keep is attacked once again by the Occasus Cult. Tired of constantly fending them off, The Baron strikes a deal that he will hand over the Artifact if the player removes the threat.

Unfortunately, that threat is dozens and dozens of Occasus Cult members attempting to break down the walls of The Baron's Keep. Fortunately, the player is given help as allies Nuru and Lana Blake join in the fight to carve their way through the throngs of Cultists. Unfortunately again, after this fight, Cult leader Asra Nox arrives on the back of the colossal Bone Dragon, and Nuru and Lana have already left, and the Baron continues to be no help.

Once the Bone Dragon is down, The Baron gratefully hands over the Artifact. 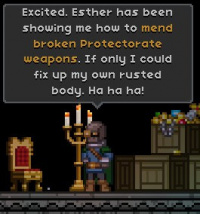 Following the destruction of the Bone Dragon, the Baron joins the growing crew at the Outpost camped outside of the Ark. From this spot, the Baron grants the Quest "The Hero's Forge", which rewards the player for having held onto the weak Broken Broadsword they got at the very beginning of the game. Bringing the sword and 10 Tech Cards to the Baron enables him to repair it, granting the player the powerful Protector's Broadsword, one of only two Tier 7 weapon available in the game through normal means (although arguably the Protector's Broadsword is the only real tier 7 weapon out of the two).

You need to have the Broken Broadsword in your inventory in order for the Baron to have the quest marker above him.