For the background music played during gameplay, see Music Tracks. 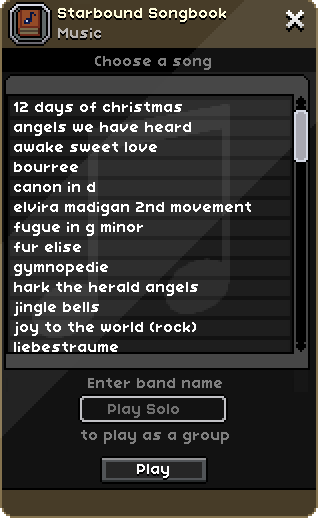 Music is a game mechanic that allows the player to play songs using instruments. Songs can be imported into the game using ABC notation. This allows players the ability to share songs, or search for songs others have composed online.

Instrument usage has no effect on ongoing game music; however, notes made by instruments are categorized as sound effects rather than as music, so muting the game's music does not mute music produced by instruments.

Instruments are items that can be used to play songs. They produce unique sounds when played, and the same song can be played using different instruments. Some songs may even be intended to be played on a specific instrument. There are a large number of different varieties of instruments (listed below). Tiy stated in a stream that they intend to give each race a unique instrument as well, which appears to be more or less fulfilled.

In multiplayer, different players can play different instruments together to play songs as a band.

Below are all the instruments in game to date.

Adding your own songs

Songs need to be added to the game directory. Place them in the folder path:

Place the file into the \songs folder, you may need to restart after adding them there.

Programs to listen to and/or edit .abc Songs