USCM Bunker was a Human Dungeon made up of complex underground tunnels. There was a small building on the surface that typically contained a Serpent Droid. Near that building was the entrance tunnel leading down to the main bunker.

Inside the bunker were many Human enemies armed primarily with Pulse Rifles, Flamethrowers, and Nightsticks. Several unique monsters were also present, including Repairbots, Cleaning Bots, and Serpent Droids. 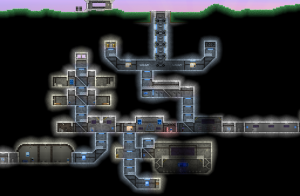