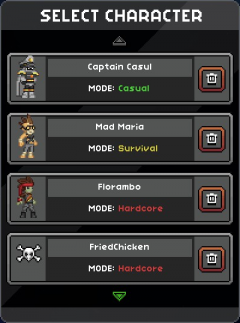 The character selection menu with characters in various difficulty modes. 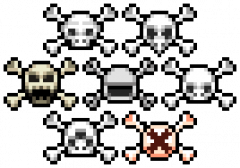 Each race has a unique skull icon marking the death of a character in Hardcore mode. 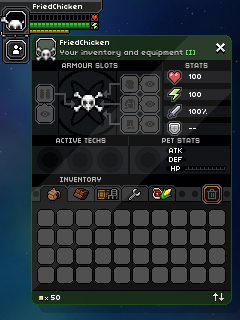 The party window and inventory of a character who had just died in Hardcore mode.

Difficulty mode is selected at character creation and applies to the character being created. The character's difficulty mode determines whether they need to eat food to survive, the conditions under which they are able to beam to their ship, and the repercussions of their death. The difficulty mode of a character cannot be changed after they have been created.

Survival is the default difficulty mode when starting a new character.

There are currently three modes available:

Characters in Casual mode do not need to consume food items in order to survive. Eating any single food item gives them a Full Belly, which provides slow healing plus any buffs associated with the food, but prevents eating multiple food items to stack buffs. They can beam to their ship from nearly any location. Despite the character creation menu stating that there are no death penalties, characters in Casual mode still lose 10% of their carried pixels upon death.
Of the three available difficulty modes, Casual mode provides the most relaxed gameplay experience. It is ideal for new players, as well as those who wish to explore and build with minimal interruption.

Characters in Survival mode must consume food items in order to prevent their hunger meter from depleting. Failing to manage their hunger will lead to starvation and eventually death. Most food items only fill a percentage of the hunger meter, which means they can eat multiple food items in quick succession and stack buffs until their hunger meter maxes out and inflicts Full Belly. They can not beam to their ship while in front of background walls or deep underground unless they place and use a teleporter. Upon death, they lose 30% of their carried pixels and drop their materials and consumables. Dropped items may be retrieved by returning to the location at which the character had died. Items are not dropped in instanced missions, however.
Survival mode emphasizes resource management and thus makes for a more challenging gameplay experience. It provides players with an incentive to take advantage of the game's food-related mechanics.

Characters in Hardcore mode bear the same passive penalties and advantages as in Survival mode. Upon death, however, they drop all of their items and become permanently disabled at the character selection menu. Items are not dropped in instanced missions, however, and are permanently lost along with the character, even in multiplayer.
Hardcore mode is primarily intended for players who seek bragging rights in achieving certain goals without dying.