From Starbounder - Starbound Wiki
(Redirected from The Player)
Jump to: navigation, search

The Player is the avatar that represents the user playing Starbound as they explore the galaxy, fight monsters and mine to create many unique items and tools.

The Player is two blocks wide and four blocks tall normally (the Distortion Sphere and related Techs shrink the player to a size of two blocks wide by two blocks tall). In addition, the player has a base health of 100, a base energy of 100, and an energy regeneration rate of 58.5% per second (going from empty bar to full bar takes 1.75 seconds regardless of energy pool size). Performing an action that consumes energy pauses energy regen for 1.5 seconds.

Survival and Hardcore players have a food bar size of 70 and a food bar depletion rate of -0.0583 per second (it takes 20 minutes for a full food bar to deplete completely and cause starvation effects). Over-filling the food bar (or eating any food as a Casual player) incurs the Well Fed status effect, stopping food bar depletion and bestowing other effects.

The player has 5 item bags which can hold 40 items and item stacks each. The leftmost tab is the main bag, followed by the material bag, the object bag, the reagent bag, and the food bag. In addition, the player can carry up to 9,999,999 Pixels or Ancient Essence at a time, and the player has functional and cosmetic equipment slots for the head, chest, legs and back (these can only hold appropriate Armor pieces, Costume pieces and functional backpacks). 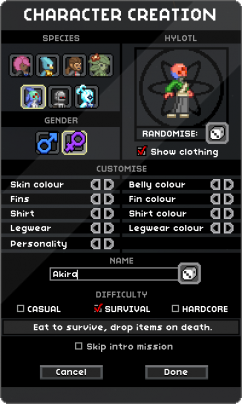 After launching Starbound your first task will be to create a character. In the character creation menu you will be able to select among seven different races: Apex, Avian, Floran, Glitch, Human, Hylotl, and Novakid, Each race has their own unique aesthetics and racial features which can be unlocked over the course of the game. You will also be able to select their sex, their appearance, and what game mode you would like them to play in.

There are three different game mode for you to play in. Casual is the easiest mode, where you only lose 10% of carried Pixels if you die. Survival is an average mode where you lose 30% of carried pixels as well as liquids, building materials, voxels from the Pixel Compressor, food, crafting materials, dyes, medical items and other consumables on death (lost items can be retrieved if they are not in an unreachable place). In addition, Survival mode introduces a hunger mechanic which can kill the player if they do not eat food for too long. Hardcore is the hardest mode, where if you die you will drop all items and pixels (both the items and the pixels can be retrieved by another player if they are not in an unreachable place). A Hardcore player cannot respawn, forcing the user to switch to another player if the Hardcore player dies.