A mysterious doorway leading into an unknown dimension. What could possibly go wrong?

A Challenge Door is a teleportation gate object found underground on planets. When interacted with it transports the player to one of 24 different challenge rooms, which can be completed for a reward. The reward is usually some pixels, a weapon, and occasionally items such as Manipulator Modules. There may also be chests that require techs, such as the Distortion Sphere, to reach.

Challenge Doors disappear 15 seconds after being used or if the block below it is removed for any reason, such as being mined or affected by gravity.

Each door has runes on it in the language of the Ancients. They translate to:

The following is a list of the 24 challenge rooms, as they are known in the game assets.

Additionally, 6 challenge rooms exist in the game assets but are not enabled, and thus cannot be encountered in an unmodded game. 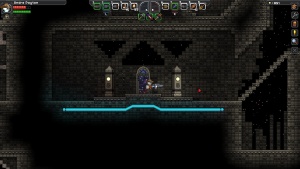 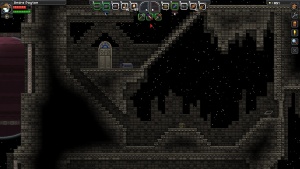