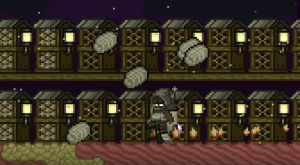 Moth Traps are a resource producing object which allows players to harvest silk fibre, which is used to produce silk.

They only produce silk fibre while the attached lantern is lit. The trap will light itself between late in the night until dawn, making it one of the few objects in game which is tied to planet day/night cycles. Oddly enough, moth traps still function on your Ship, which doesn't have an apparent day/night cycle of its own. These traps also act as a Light Source, but only at night.

The trap can only be harvested when full, giving 1-3 pieces of unprocessed silk. Harvesting the silk will reset the trap to empty and it will begin to fill itself again. It will only take one night to fill up the trap, unless you place the device before the night has begun.

Players will be able to harvest from moth traps within a distance at their own level, just above them, and just below them. Placing these stations as close together by using platforms is advised.