Big Ape and the Beanstalk 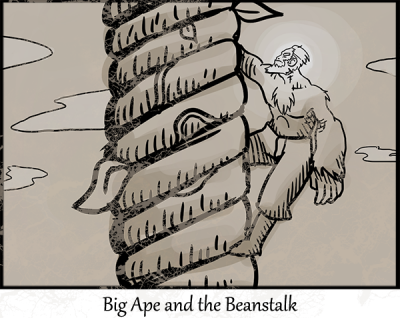 Once upon a time, many years ago, our glorious leader Big Ape was on his way to market. Many other leaders sent their servants to market, but not Big Ape. He went himself, in order to shower his subjects with his greatness, and let them bask in his glory. He was kind like that.

This particular day, Big Ape was accompanied by his mother's prized cattlesnake (and at least fifty Miniknog guards), in order to sell the beast. His mother had heard that they were receiving high bids on leading auction sites, so Big Ape was more than willing to help her earn her fortune. The journey was going smoothly, until Big Ape realised his sizeable entourage had come to a halt. "What's all this, then?" Big Ape called out. Through the crowd came an old Hylotl crone, cackling and holding out her hand. "Yer cattlesnake for these magic beans!" she crowed, rattling some regular-looking beans in her hand. Big Ape snatched them up. It was a good trade, he knew it. Magic beans! "You have yourself a deal," he said to the crone, handing over the reigns of the cattlesnake. Then he ordered the Miniknog to have the crone arrested for illegal street peddling. In the ensuing scuffle, the cattlesnake ran away, never to be seen again.

Big Ape returned home, and his mother praised his business savvy and celebrated the investment in magic beans, despite losing her prized animal. Big Ape placed his magic beans in the back of a drawer, and over time, forgot about them. One day, he found them in the drawer and tossed them outside, because they smelt a bit like a fishpond.

The next day, Big Ape could hardly believe his eyes. A giant beanstalk had sprouted in his garden. "In the name of me, I swear I shall scale this beanstalk!" Big Ape exclaimed, then effortlessly climbed up the gigantic plant without even breaking a sweat.

At the top, he froze. He found himself on a solid platform of cloud, standing before a large castle. He walked up and knocked. The door opened and before Big Ape stood a giant. Big Ape looked down at the giant and greeted him. "I am Big Ape, your glorious leader," Big Ape said. The giant growled, and gestured Big Ape inside.

Big Ape surveyed the castle. It was filled with pots, pans, bones, furniture, a couple of those trees made of eyeballs, and an Avian in a cage. Big Ape approached the Avian, who looked at him blankly, turned around, and promptly laid a golden egg. "Gold!" Big Ape exclaimed. "Gold! Think of all the palaces this could buy! My people would love me even more!" Without stopping to think, Big Ape grabbed the Avian by the neck and ran from the castle. Suddenly he heard thundering footsteps, and a booming voice: "Fee, fi, fo, fum, I smell the blood of some Apex scum."

Big Ape rolled his eyes, ran to the top of the beanstalk, hurled the Avian down (it could probably fly, he figured) and waited to face the giant. The giant came charging, his face screwed up in rage, and Big Ape hit him with a flawless one-two punch, then grabbed him by the shoulders and leaped down from the castle in the sky, smashing the giant into the ground. There they fought, Ape and Giant, until finally Big Ape was victorious, aided only in a small way by the three hundred armed Miniknog guards who'd turned up in the meantime.

Big Ape stood atop the giant's corpse and looked around for his Avian companion. The golden egg-laying creature lay on the floor, looking as if he'd crashed into the ground at high velocity. Big Ape shook his head sadly. Another victim of the giant's hubris, no doubt.

Big Ape learned two important lessons that day; he was rich enough not to be bothered about losing a supply of golden eggs, and that he could totally take a giant in a fight.