Omnicannon are a robotic space monster found in space encounters.

These are stationary enemies mounted to surfaces. Once activated by player proximity or by being attacked, their central eye lights up and they aim their cannon towards the player, firing slow single-shot blasts in a steady pattern. They have roughly a 180-degree targeting arc, and will continue to attack as long as the player is in line-of-sight within that arc, even if the player moves well outside the Omnicannon's activation range.

The safest way to tackle them is with a ranged attack from outside their line-of-sight; homing missiles are particularly adept at this. Another tactic is to mine the blocks that the Omnicannon is attached to with a mining mech arm or the Matter Manipulator. Though the Omnicannon will re-orient itself visually "upright" according to the screen once detached, its actual targeting arc will not change, giving you a safe zone to attack directly. 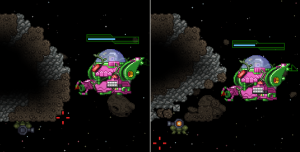 An Omnicannon detached from the asteroid it was hanging from. Though now "upright", it cannot change its original target range and is now helpless from above.