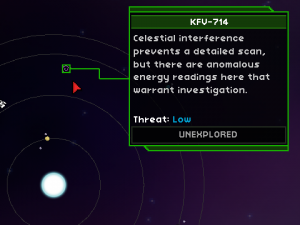 A Space Encounter in the navigation console

Also often called an Anomaly, a Space Encounter is a procedurally generated space dungeon that can randomly appear in any star system. Players can explore Space Encounters by navigating their ship towards the purple spirals of "anomalous energy readings", and deploying their mech.

Each Space Encounter has one of several possible destinations, usually marked by a Landing Beacon and sometimes by a Docking Field. A green arrow will indicate the shortest path to the destination, which can be reached by traversing a hazard field filled with various space monsters.

Besides the obvious increase of the monster difficulty, the threat level has several other effects:

To reach the destination of a space encounter, a hazard field filled with several packs of space monsters has to be traversed first. Hazard fields are usually asteroids with varying density, minefields filled with large groups of Spinemines, ship wreckage with Twinguns attached to the outer sides, or a combination of any of these. In between the static hazards, groups of randomly selected, mobile space robots will be positioned, which start chasing the player's mech if it gets too close.

Each space encounter has a circular layout, meaning the destination can be reached from the starting point by flying towards either side. The height of the area is fixed and bounded by invisible borders at the "ceiling" and at the "floor". It should be noted that the hazard layout on both sides of the starting point is identical—the mobile monster groups are not, however.

Encounters with a higher threat level will almost certainly require an upgraded mech.

There are 58 different destinations for a Space Encounter, each of which appears with the same probability. Note that the USCM Ship cannot appear in encounters with low threat level, and the Protectorate Base can only appear in extreme encounters. The chance of finding a single specific location is consequently roughly 1.72% to 1.79%, depending on the threat level.

The surface-mounted space capsules, which can be found attached to asteroids, have a higher chance to contain mech part blueprints.

The space robots encountered while flying through the hazard fields can drop salvage components, as well as Sticks of Ram, Silicon Boards and Copper Wire. Spinemines and Rusticks have a considerable lower chance to drop any items due to their passive nature.

These items can be found only in Space Encounters.