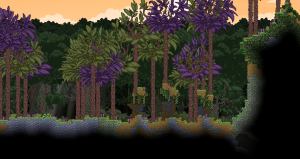 A jungle biome.
Jungle is a primary biome type characterized by many tropical trees and ground growth growing closely together. Jungle planets are a 'dangerous' threat level, geared toward tier 4 in progression. Avian villages and dungeons are most abundant on jungle planets.

Jungle biomes can be created and expanded using a Jungle Terraformer, and a planet will convert to a Jungle planet once half of the planet's surface has been terraformed into Jungle biome.

Possible mini biomes inside jungles are giant flower, which has large flowers in place of trees, swamp, characterized by muddy water and swampy tress, eyepatch, with a variety of plants which resemble eyes, and mushroom patch which has large mushroom trees.

The surface layer of jungles is primarily made up of dirt. There's an abundance of gatherable wood because of plentiful trees. The planet's primary color in the navigation console and while orbiting above is the primary color of the dirt found there.

Mid game ores are found in jungle biomes, with copper, silver ore, gold, titanium and durasteel available near the surface.

The surface of the ground is mostly covered in grass and bushes, and the topography is often hilly with small subterranean caves.

Jungle biomes use their own two sets of music tracks for day and night. 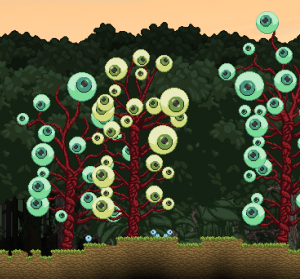 Trees in eyepatch mini biomes appear to have large eyes.

There are sub biomes which can be found on jungle planets in addition to their unique mini biomes. Garden, savannah, mutated or forest have a chance to appear as smaller biomes on jungle planets. These biomes will include things like their associated blocks, trees, and crops when they appear. Mini biomes for each of these secondary biome types can appear inside them as well.

Jungles can also be found as sub biomes on forest or mutated planets.

These mini biomes can be found on jungle planets or inside jungle sub biomes on other planet types. Each has their own creatures and items outside what's available in jungle biomes.

The most distinguishing characteristic of jungle mini biomes are their trees; a different type is unique to each mini biome.

Jungle planets stick to the standards for planetary layer composition.

Weather in jungle biomes is mostly clear, with occasional rain or storms. Weather happens for each planet based on the weights given to the weather types (probability is calculated by dividing a single weight by the sum of all weights); the probability for weather types on jungle planets is as follows:

There are a large variety of harvestable crops found in jungles. These can be harvested by interacting with them or by digging them up. They'll drop produce and have a chance to drop a seed which can be replanted.

In addition to procedurally generated creatures, there are a variety of unique monsters, bugs and critters found in jungle biomes. Some of these are also found in other biomes, while others are unique only to jungle biomes. While these unique creatures have a chance to appear on jungle planets, they will not all appear on each one. In addition to unique creatures, each biome has multiple types of both procedural ground and flying creatures.

There are a variety of items which are specific to chests found in jungle biomes. Some of these may have a chance of being found in other places throughout the universe, but they've all been specifically allocated to chests within jungle biomes.

Jungles can have a large variety of settlement types found on them. These include small microdungeons and NPC camps, larger racial villages and hostile dungeons. Smaller jungle planets usually contain only one dungeon or village, while larger jungle planets can contain as many as three.

Jungle planets are the best place to find Avian dungeons and villages. They're much more likely to appear on jungle planets then any other type.